A jailbird drug hoodlum gave himself up to Don Muang police on Monday after a shooting outside a 7-Eleven in the Sikan area of Don Mueang.

Chalermphon was hit in the sexual organ and testicles and taken to Paolo Rangsit hospital after the incident around 11 pm on Sunday night.

Songwut gave himself up next day.

That is him pointing at his Glock 30 .45 gun that was taken into evidence along with a Nissan Almera car he used to flee the scene.

Police had gone to the suspect’s house on Sunday night but found only a motorcycle that was also used in the crime.

The suspect has admitted his involvement. He has been out of prison for a year after being jailed for drugs and weapons violations.

He said that he got cross with the victim after a dispute over a parking space outside 7-Eleven.

He has been charged with attempted murder and weapons violations and detained.

Daily News said in their headline that the civil servant had been hit in his “Phuang Sawan” (heavenly tackle) that translates as the English slang term “crown jewels”. 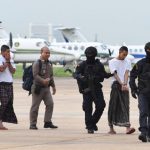 Mark KellyJune 5, 2020
Despite global reopening push, some jobs are gone for good Factories and stores are reopening,...
END_OF_DOCUMENT_TOKEN_TO_BE_REPLACED