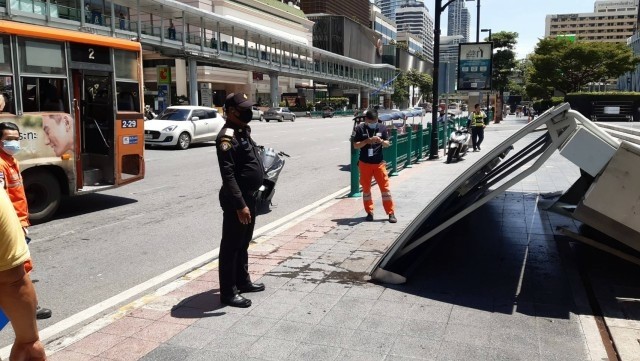 Bangkok Governor Pol General Aswin Kwanmuang has urged the Traffic and Transportation Department to assist five citizens who were injured after the bus shelter in front of a famous department store at the Ratchaprasong intersection collapsed on Friday (September 11).

The bus shelter appeared to have collapsed because its structure was rusty and damaged although it had been repaired periodically. Bangkok Metropolitan Administration (BMA) officials removed the collapsed bus shelter and set up a tent on Saturday.

“BMA would like to apologise for the accident. Although the victims were only slightly injured, it caused uncertainty among people over the durability of bus shelters,” Aswin said. “Therefore, the BMA has appointed the Traffic and Transportation Department to check and improve the durability of bus shelters across Bangkok, especially those that have been used for a long time, to regain the confidence of the people.”

In place of the collapsed bus shelter, he said the BMA would construct a smart bus stop similar to the one in front of Central Plaza Grand Rama 9 with various facilities, such as LFD screen that inform about bus arrival time, CCTV camera, lighting, mobile phone charger and Wi-Fi hotspot.

“We will begin construction immediately after checking underground utilities to ensure the safety of citizens. We expect to complete it by next week,” he added. 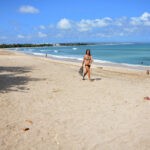 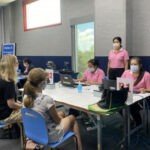