The oil-slick waves lapping the gulf shores deposit dead fish, jellyfish and octopuses mixed with trash on the beach.

Hua Sai district residents around Na Saton Beach are pleading with local authorities to investigate the source of oil slicks ravaging theirs and other beaches across Surat Thani, Songkhla and Nakhon Si Thammarat provinces.

“The authorities came, but they just took photos and went back,” said Phitanee Yodsurang, the beach resident who first raised the alarm Wednesday. Phitanee had been exercising on the beach when he noticed oil patches being examined by concerned fishermen.

The oil at Na Saton Beach stretches at least two kilometers, with the beach covered in debris and trash deposited there since a powerful tropical storm struck in January.

“Dead fish, octopus and jellyfish keep washing up on the shore in waves. No one knows the source yet; it might be due to the oil. Then, when the sun hits the oil washed up on shore, it melts into the sand. No one knows how toxic that is,” Phitanee said.

A Khaosod reporter based in Nakhon Si Thammarat interviewed a petroleum engineer working at a nearby rig who said it was unreasonable to suggest an ocean liner or rig caused the spill, since they did not contain enough oil to affect several provinces.

The engineer said authorities should check the oil for its chemical fingerprint to identify the source.

On Monday, at the popular tourist destination of Samila Beach in Songkhla, local authorities brought in trucks to dump sand atop oil deposits there. Energy official Sutthichai Suksisen collected oil samples there and said they would be sent for testing, which would take about a month.

Sutthichai said oil slicks have appeared annually on southern beaches for decades. In 2016, tests found it did not seem to come from oil platforms in the Gulf of Thailand. khaosod 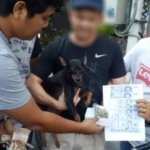