Northeast China: A car rammed into a group of schoolchildren crossing a street in front of an elementary school in China’s northeastern Liaoning province Thursday, causing an unknown number of casualties, state media said.

Police took the driver into custody and are investigating the cause of the incident, the official CCTV broadcaster said on its Weibo social media account.

Unverified videos circulating social media show a car veering onto the wrong side of the road and ploughing through the line of pupils, the impact from the crash throwing bodies across the road.

Other footage showed at least two small children lying unconscious and bleeding on the street.

Victims of the crash are undergoing medical treatment, according to CCTV. The incident happened around noon.

Grisly car accidents are common in China, where transportation authorities have struggled to enforce safety regulations.

Earlier this month, at least 13 people died when a bus plunged off a bridge in Chongqing province, after the driver got in a fight with a passenger.

In September, 11 people died when a car struck a crowd in a public square in the central Hunan province city of Hengdong.

In February, a van packed with pressurised gas tanks and bottles full of petrol caught fire and ploughed into pedestrians in Shanghai, leaving at least 18 people injured. 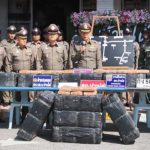