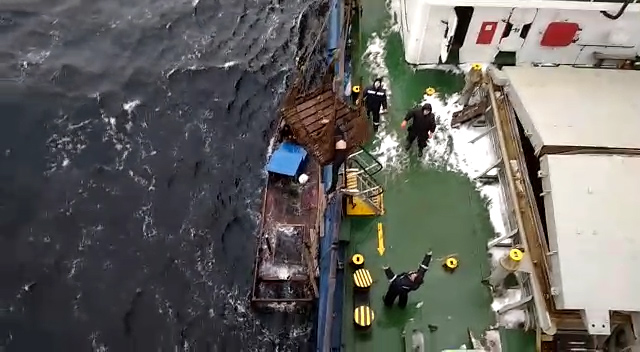 Three North Korean fishermen were rescued after spending three nights aboard their half-submerged wooden boat in the Sea of Japan.

The sailors had been fishing in the waters when when their wooden vessel was clattered by a wave which cut the engine last Tuesday.

Their captain died from the freezing conditions while another man suffered frost bite. A passing Russian trawler spotted the boat and rescued the three men and retrieved the dead body of their colleague.

when the boatswain on the Peter Ilyich radioed their destination port in Busan, South Korea, to request assistance they allegedly refused to help them – forcing the ship to return to its origin in Vladivostok, Russia.

Viktor Sidorov, head of the Russian fishing collective in Kamchatka which owns the trawler, told local media they were around 200 miles from the shore when they were found.

He said: ‘’The ship’s crew saw on the open sea a half-sunk wooden boat with people.

”The crew on board the Peter Ilyich managed to raise three living sailors and one dead. According to preliminary data, they were citizens of the DPRK.

”I do not know all the details, but I know that the sailor Pavel Alexandrin, the boatswain Hovik Avdalyan and the old man Alexander Gusev took the most active part in saving the Koreans. They should return to Kamchatka in late December. I think they will be encouraged by their actions.’’

A representative of the DPRK consulate in Vladivostok told Russian state-owned news agency RIA Novosti that the accident happened because the motor on the schooner did not start and and there was a strong wave that hit the ship.

A large number of North Korean ghost ships are found on the shores around Japan. Often their crew have died after the vessels cut out and sink in the freezing waters. 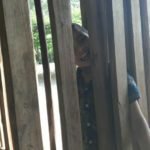 Real Estate in Silom now the most expensive