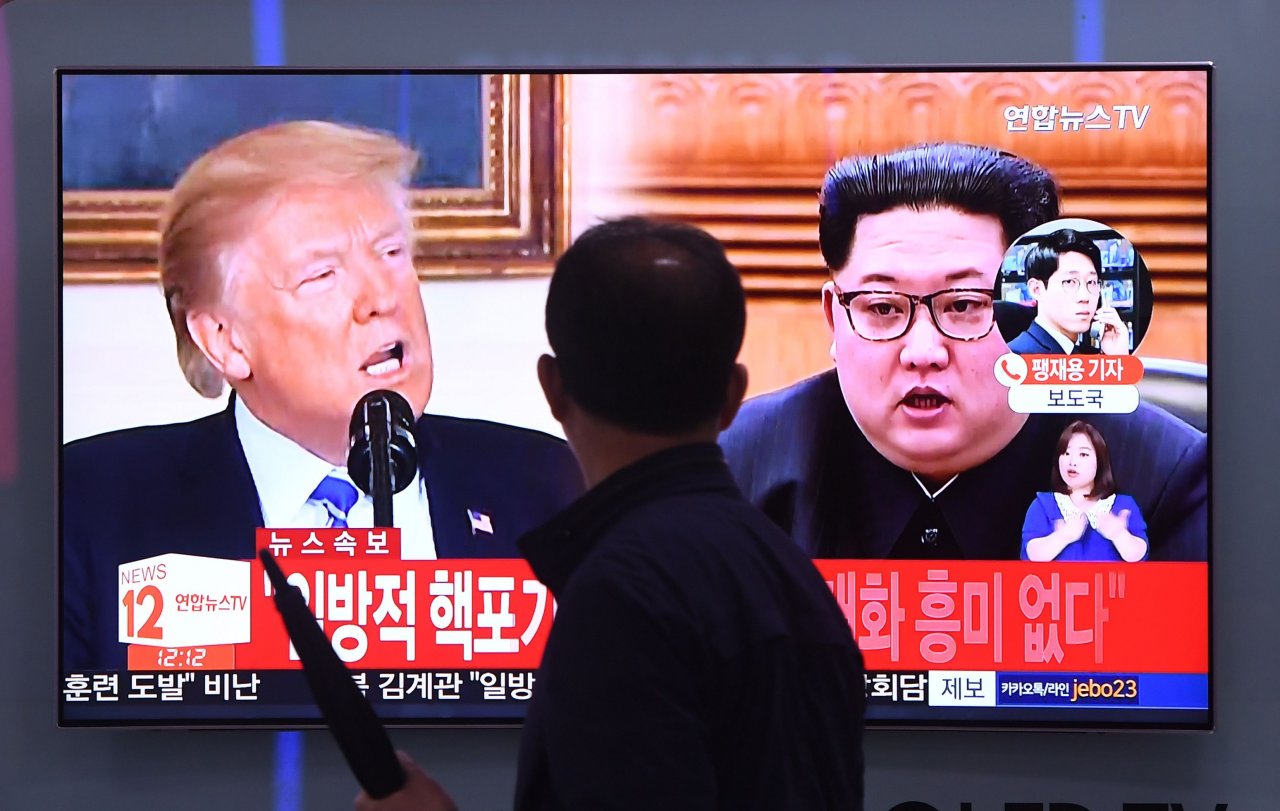 It also cancelled high-level talks due Wednesday with Seoul over the Max Thunder joint military exercises being held between the United States and South Korea, denouncing the drills as a “rude and wicked provocation”.

It is a sudden and dramatic return to the the rhetoric of the past by Pyongyang, after months of rapid diplomatic rapprochement on the peninsula.

“If the US is trying to drive us into a corner to force our unilateral nuclear abandonment, we will no longer be interested in such dialogue,” first vice foreign minister Kim Kye Gwan said in a statement carried by state media.

In that case, he added, Pyongyang would have to “reconsider” its participation at the summit, due in Singapore on June 12.

The North’s arsenal is expected to be at the top of the agenda of the historic talks, but Pyongyang has long insisted it needs the weapons to defend itself against invasion by the US.

Washington is pressing for its complete, verifiable and irreversible denuclearisation. But so far the North has not given any public indication of what concessions it is offering, beyond euphemistic commitments to denuclearisation of the “Korean peninsula”.

Pyongyang had “made clear on several occasions that precondition for denuclearisation is to put an end to anti-DPRK hostile policy and nuclear threats and blackmail of the United States”, minister Kim said.

In the past, Pyongyang has demanded the withdrawal of the US troops stationed in the South to protect it from its neighbour, and an end to Washington’s nuclear umbrella over its security ally.

It was a “sinister move to impose on our dignified state the destiny of Libya or Iraq”, he said. “I cannot suppress indignation at such moves of the US, and harbour doubt about the US sincerity.”

The North has long said it needs nuclear weapons to protect itself against a US invasion. After giving up his atomic programme, Libyan leader Moamer Khadafi was killed in an uprising backed by NATO bombing.

Minister Kim also dismissed offers by US Secretary of State Mike Pompeo — who has visited Pyongyang twice in recent weeks, coming back the second time with three released US detainees – for US economic aid if the North denuclearises.

“We have never had any expectation of US support in carrying out our economic construction and will not at all make such a deal in future,” Kim said.

In recent weeks, as well as an eye-catching summit with the South’s leader last month in the Demilitarized Zone, Kim has twice met Chinese President Xi Jinping and Pyongyang has announced it will destroy its nuclear testing site next week.

Analysts said Pyongyang was now trying to redefine the terms of the debate.

“It’s a diplomatic tactic,” Kim Hyun-wook, professor at the Korea National Diplomatic Academy, told AFP, calling it “brinkmanship to change the US position”.

“It looks like Kim Jong Un was pushed into accepting US demands for ‘denuclearisation-first’ but is now trying to change its position after normalising North Korea-China relations and securing economic assistance,” he added.

“The classic North Korean tightrope diplomacy between the US and China has begun.”

US officials have repeatedly claimed credit for Washington’s “maximum pressure” policy for bringing Pyongyang to the negotiating table.

Joshua Pollack of the Middlebury Institute for International Studies said Pyongyang had been irritated by the “triumphalist tone”.

“The North Koreans aren’t happy with what they’re seeing and hearing,” he said. “There is still a yawning gulf between expectations for diplomacy in Pyongyang and Washington, DC.”

Earlier KCNA denounced the Max Thunder joint military exercises being held between the US and South Korea as a “rude and wicked provocation”, and Seoul said it had received a message cancelling planned high-level talks “indefinitely”.

The two-week drills started last Friday and involves some 100 aircraft from the two allies, including F-22 stealth fighter jets.

Hostilities in the 1950-53 Korean War stopped with a ceasefire, leaving the two halves of the peninsula divided by the Demilitarized Zone (DMZ) and still technically at war.

The North has spent decades developing its atomic arsenal and missiles capable of reaching the US, earning itself multiple rounds of UN Security Council resolutions, while Trump and Kim traded personal insults and threats of war last year.

Relations underwent a sudden turnaround as Moon used February’s Winter Olympics in the South to broker talks between Washington and Pyongyang.

Washington said it will continue to plan the meeting in Singapore on June 12, with State Department spokeswoman Heather Nauert telling reporters it had received “no notification” of a position change by North Korea.

The exercises were “not provocative” and would continue, she added.