The chief executive officer of Nok Air. Patee Sarasin has been resigned.

In a letter dated Thursday to the Stock Exchange of Thailand, Brian Leslie Jeffery, chairman of Nok Air’s board of directors, said Patee’s resignation as CEO took effect on Thursday. Patee has been appointed deputy chairman of Nok Air’s board of directors, the letter added. The board appointed Piya Yodmanee as the new CEO with immediate effect on Thursday. Patee was the CEO of Nok Air since 2004. Asia Nation

ATM blew up in an ‘unprecedented’ attack 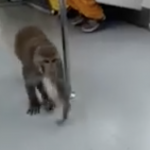