Nine foreigners who had overstayed their visas and two other foreign nationals working without a permit were scooped up in Pattaya in the Immigration Bureau’s latest “Operation X-Ray Foreigner” sweep.

About 40 Pattaya, Tourist and Immigration police officers spread out across the area for the crackdown, the latest in a series of sweeps that began early this year.

Officers checked apartment houses, condos and hotels, which are required to report foreign nationals residing there.

No information on those arrested was released. 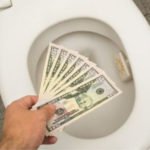 Thai Airways ‘sorry’ for dumping passengers out of First Class