An inter-provincial bus operator has now strengthened its fleet for the Bangkok to Nakhon Ratchasima route.

Nakhonchai 21 yesterday announced that it had spent Bt40 million on adding 11 more buses for this popular route.

The new additions will take the company’s fleet for that route to a total of 37 buses and will serve passengers who need to leave Bangkok or Nakhon Ratchasima after 7 pm.

Nakhonchai 21 first launched a bus service between Bangkok and Nakhon Ratchasima last December but with only 26 buses for the route, trips beginning after 7 pm could not be accommodated.

“We have never stopped responding to passengers’ needs so we have strengthened our fleet,” said the company’s deputy managing director, Kunthira Wongbenjarat Chaiyut.

As a special promotion, eight free bus trips were provided by the firm yesterday, with passengers on those buses enjoying the company of eight honorary hostesses – beautiful young women from Nakhon Ratchasima’s affluent families.

The competition among bus-service operators for the Bangkok to Nakhon Ratchasima route has been fierce in recent decades. There are at least five large operators. 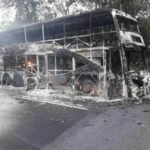