Home » The new fire in an empty Rohingya village 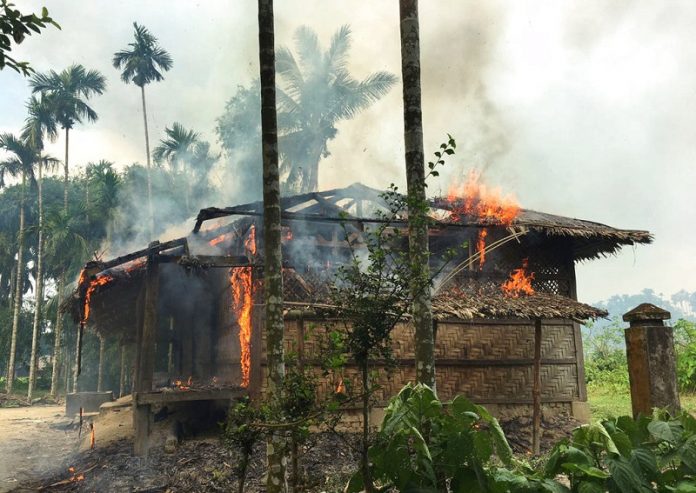 The new fire in an empty Rohingya village

Myanmar village that had been abandoned by Rohingya Muslims and pages ripped from Islamic texts that were left on the ground. Journalists saw new fires burning in the village Thursday, that intensifies doubts about government claims that members of the persecuted minority have been destroying their own homes.

About two dozen journalists saw the fires in Gawdu Zara village in northern Rakhine state on a government-controlled trip.

About 164,000 Rohingya from the area have fled across the border into Bangladesh in less than two weeks since Aug. 25, when Rohingya insurgents attacked police outposts in Gawdu Zara and several other villages, the U.N. refugee agency said Thursday.

The military has said nearly 400 people, mostly Rohingya, have died in clashes and that troops were conducting “clearance operations.” It blames insurgents for setting the villages on fire, without offering proof.

Rohingya who have fled Myanmar, however, have described large-scale violence perpetrated by Myanmar troops and Buddhist mobs – setting fire to their homes, spraying bullets indiscriminately, stabbing civilians and ordering them to abandon their homes or be killed.

On the Myanmar side of the border, reporters saw no Rohingya in any of the five destroyed villages they were allowed to tour Thursday, making it unlikely they could have been responsible for the new fires.

An ethnic Rakhine villager who emerged from the smoke said police and Rakhine Buddhists had set the fires. The village ran off before he could be asked anything else.

No police were seen in the village beyond those who were accompanying the journalists. But about 10 Rakhine men with machetes were seen there. They looked nervous and the only one who spoke said he had just arrived and did not know how the fires started.
He said the fires were set Aug. 25, though some continued to burn Thursday. Virtually all buildings in the village seen by journalists had been burned, along with cars, motorbikes, and bicycles that fleeing villagers left behind. A mosque was also damaged.

Columns of smoke could be seen rising in the distance, and distant gunshots could be heard.

“They burned their own houses and ran away,” Aung Kyaw Moe said. “We didn’t see who actually burned them because we had to take care of the security for our outpost. … But when the houses were burned, Bengalis were the only ones in the village.”

Buddhist-majority Myanmar refers to Rohingya as Bengalis, contending they migrated illegally from Bangladesh, though many Rohingya families have lived in Myanmar for generations.

Burning the homes of Rohingya can make it less likely they will return.Tens of thousands of Rohingya were driven from their homes in another wave of violence in 2012. Many are now confined to camps, while the land they once held is either vacant or occupied by Buddhist squatters. Khao Sod 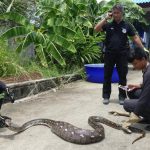