Authorities have arrested 23 people, seized over 100,000 methamphetamine tablets and over 42 million baht worth of assets in anti-drug operations over the past four days.

Narcotics Suppression Bureau and authorities from various agencies have raided 65 locations since Friday, including 60 locations raided almost simultaneously yesterday morning. Seized in the operations were 520kg of marijuana, 42kg of crystal methamphetamine known as “ice”, and a total of 100,248 speed pills. Drug-related assets worth more than 42 million baht, including 26 cars, were also frozen for examination. The highlight of the raids came at a property in Samut Prakan’s Muang district which was allegedly linked to the recent confiscation of 21kg of ice and 30,000 speed pills in the province’s Bang Phlee district.

The property was reportedly owned by Pongchai Tiamtat, a major suspected drug dealer, and his wife, Sasimaporn Supanont, who were not at home. A woman who identified herself as Ms Sasimaporn’s sister let authorities in to search the place and insisted the house was built with her father’s money. She said she did not have any knowledge of Ms Sasimaporn’s alleged drug business.

NSB commissioner Pol Lt Gen Sommai Kongwisaisuk said the couple was believed to have fled to Myanmar and the bureau would seek cooperation from Myanmar authorities in pursuing them. Mr Pongchai was known to travel to the northern border frequently and his wife had been arrested once on drug-related charges but she was released due to weak evidence, he said. Pol Lt Gen Sommai said the Office of Narcotics Control Board would have property and items in the house seized for examination. The assets were estimated at 10 million baht.

In Bangkok, anti-drug police yesterday morning searched a condominium in the RCA area which was tied to a recent drug haul in Nonthaburi but found nothing illegal. The search, authorised by the Criminal Court, followed the recent confiscation of 5 million methamphetamine pills and 120kg of crystal methamphetamine in Nonthaburi. Pol Lt Col Udomrat Itthisophapan, of the NSB, said the condo unit was linked to Ruamphol Khamnon, 27, a suspected member of a gang called Nakaoka. He said Mr Ruamphol was a small-time agent for the gang.

Citing the condominium manager, he said Mr Ruamphol rented the room from its owner and moved out on Nov 18. The raids are part of a 15-day campaign running until Jan 5 to clamp down on drug trafficking and other crimes during Christmas and New Year. The Royal Thai Police is deploying more than 90,000 police to crack down on drink driving, narcotics and illegal entertainment venues during the festive season. Source: Bangkok Post 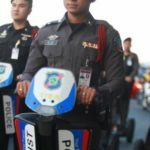