KUALA LUMPUR – Najib Razak has been charged with three counts under Section 4 (1)(b) of Anti-Money Laundering Act, Anti-Terrorism Financing Act and Proceeds of Unlawful Activities Act (Amla) 2001 on Wednesday (Aug 8).

Sessions Court judge Azura Alwi allowed an application by the prosecution to transfer the Amla cases to the High Court.

The former prime minister was accused of receiving RM27mil, RM5mil and RM10mil – which were obtained from illegal activities through Real Time Electronic Transfer of Funds and Securities (Rentas) into his bank account in three separate transactions. 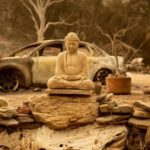 California scorched by raging wildfires the size of LA