The body of an unidentified man was found floating in an irrigation canal in Pathum Thani’s Thanyaburi district on Wednesday morning.

A passer-by spotted the body near a public park in Moo 3 village in Tambon Bueng Nam Rak and called the police.

No identification card was found on the body. The man appeared to be around 30 to 35 years old.

The left side of the head had a wound. A doctor determined he died at least two days ago.

The body was sent for a post mortem at the Thammasat Hospital. 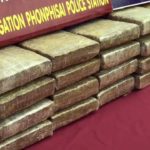