Myanmar worker arrested: A Myanmar worker allegedly killed a Thai worker while they were drinking together in Nakhon Pathom’s Muang district on Tuesday night, then called their boss and asked him to alert police.

Aung Thu waited for police and his boss at the house in Tambon Thapluang where he was staying with the victim, Thanwa Sae-lim.

Thanwa was found with injuries to his face and his throat cut. A cleaver and wooden stick were found at the scene.

Saichon Daengphayon, 45, a construction contractor who hired the two, told police that he received a phone call from Aung Thu confessing that he had killed Thanwa.

Saichon arrived at the scene soon after, found the body and called the police.

Aung Thu said tempers had flared after Thanwa began chastising him while they were drinking together. He said he had hit Thanwa with a stick repeatedly before slashing his throat.

Saichon said Thanwa liked to chide migrant workers he hired, causing most to quit. Aung Thu was the only one who could live with Thanwa at the house, he added.

Man charged with raping own daughter for five years 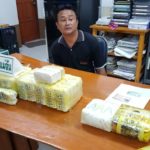