A clip of a man pleasuring himself while driving his scooter in Chiang Mai went viral, disgusting netizens across the country.

The Facebook video, posted by user Tanakorn Chamwong, has since been removed, but Chiang Mai City Life reported that police arrested Buncha Nunti, 48, as the man doing the deed in the footage, shot near Warorot Market.

The clip clearly showed the man, a Thai uncle type, driving with just one hand while touching himself with the other a maneuver that is as unsafe as it is gross.

In his own defense, he told police that he is not crazy he was just drunk. Perhaps Buncha does not realize that drunk driving is also illegal?

However, the Chiang Mai electrician was only charged with indecent exposure and fined THB500, leaving the station with a warning and without a drunk driving charge, despite his admission.

In this charming encounter, Buncha also told police that he performed the act because there was a sexy woman nearby on a songtaew and he got turned on. He said it was far from the first time he’d “enjoyed” himself while driving, but it was the first time he’d been caught. Source: Coconuts Bangkok 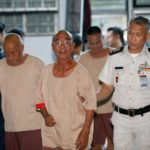