Genoa, Italy bridge collapse – Rescuers used diggers to claw through mountains of rubble, calling out in the hope of finding survivors as a desperate search for victims of the viaduct collapse entered its fourth day Friday with up to 20 people still missing.

Italy’s government has intensified its attacks on the operator of the decades-old Morandi bridge, which buckled without warning on Tuesday, sending cars, trucks and huge chunks of concrete plunging 45 metres (150 feet) onto railway tracks below.

Anger is rising over the tragedy that left dozens dead and the structural problems that have dogged the viaduct for decades.

Despite dwindling expectations of finding survivors, rescue workers said they had not given up hope as they pressed on with the dangerous operation to search through the unstable mountains of debris.

Cranes and bulldozers are working to help clear the site as hundreds or rescuers try to cut up and remove the biggest slabs of fallen bridge.

“We are trying to find pockets in the rubble where people could be — alive or not,” fire official Emanuele Gissi told AFP.

With the provisional toll at 38 dead, Genoa’s chief prosecutor has said that between 10 and 20 people could still be missing.

The populist government has accused infrastructure giant Autostrade per L’Italia of failing to invest in sufficient maintenance — a claim the company denies — and said it would seek to revoke its lucrative contracts.

Interior Minister Matteo Salvini demanded that the company offer up to 500 million euros ($570 million) to help families and local government deal with the aftermath of the disaster.

“If we’ve put up five million euros, they should offer 500 million,” he told reporters.

“There needs to be an immediate, concrete and tangible signal for these families: they should put their hands on their hearts and in their wallets.”

Authorities plan a funeral service for the victims on Saturday, coinciding with a day of mourning.

But local media said some families have chosen instead to hold private funerals, including the relatives of 24-year-old Stella Boccia, killed alongside her boyfriend.

The dead also include children, one as young as eight, and three Chileans and four French nationals. Fifteen people were injured, five of whom are in serious condition.

The French nationals, all in their 20s, had travelled to Italy to go to a music festival, and other victims included a family setting off on holiday and a couple returning from their California honeymoon.

One Italian mother said she was out shopping when a huge chunk of concrete from the bridge hit the store she was in.

“I was buried up to my chest, and my daughter was completely buried. I fainted several times, Marina Guagliata, 58, told Italian media from her hospital bed.

More than 600 people were evacuated from around a dozen apartments beneath the remaining shard of bridge.

On Thursday evening the first residents of some buildings in the affected area were allowed to return home, though others are too badly damaged to save.

Local hotels and individuals have offered free lodging to those still displaced.

The Morandi viaduct was completed in 1967 and has been riddled with structural problems for decades, leading to expensive maintenance and severe criticism from engineering experts.

Its collapse prompted the government to announce a year-long state of emergency in the region.

Autostrade, which operates and maintains nearly half of Italy’s motorways, estimates it will take five months to rebuild the bridge.

It denies scrimping on motorway maintenance, saying it has invested over one billion euros a year in “safety, maintenance and strengthening of the network” since 2012.

Shares in Atlantia, the holding company of Autostrade, slumped Thursday in the face of the barrage of criticism.

Atlantia has lashed out at the threats to revoke its concessions and warned that the government would have to refund the value of the contract, which runs until at least 2038.

The disaster is the latest in a string of bridge collapses in Italy, where infrastructure generally is showing the effects of a faltering economy.

Senior government figures have also lashed out at austerity measures imposed by the European Union, saying they restrict investment.

But the European Commission said Italy it “will not engage in any political finger pointing”, adding that it had given Rome billions of euros to fix infrastructure.

The collapse has prompted fears over ageing infrastructure across the world, including in Venezuela where a fire on a viaduct also designed by Italian engineer Riccardo Morandi caused a major blackout last week. 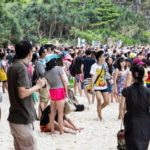