A speeding large motorcycle crashed into a car at an intersection in Ayutthaya’s Uthai district early on Thursday, killing the passenger and severely injuring the rider.

Police said the accident happened at 2am at the Grand Market Intersection on the Rojana Road in Tambon Thanu.

The passenger, Nattapol Chuensaichon, 24, from Bangkok, suffered a broken neck and the rider, Parinya Dejpakorn, 23, also from Bangkok, was severely injured and taken to Ayutthaya Hospital.

Their Suzuki Predator GSX-S750 crashed into the front of a black Toyota car, whose shaken driver, Suriyan Kaewkham, 50, waited for police at the scene.

Suriyan told police that he was making a right turn at the intersection when his traffic light turned green. He said the speeding motorcycle, which was heading to the Uthai district downtown, hit his car, hurling the two men over his car and on to the road several metres away.

Suriyan said he was very sorry over the death and injuries. 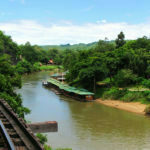