In news that’s bound to be welcomed by gamers everywhere, it seems the upcoming Mortal Kombat movie will be a properly faithful adaptation of the source material.

In a post on Twitter, Mortal Kombat screenwriter Greg Russo not only confirmed the rumours that the movie will indeed be R-Rated, but revealed that it’ll feature big screen fatalities, which are the brutal, intensely gory finishing moves that have become a staple of the Mortal Kombat games.

Since it’s already been stated by other members of the team, I’m gonna put this one to bed. MK WILL be R-Rated and for the first time EVER, FATALITIES will FINALLY be on the big screen (and no I’m not gonna say which ones) You’ll just have to wait for the movie & see!!!
The screenwriter stopped short of revealing exactly which fatalities will make it to the big screen, but his wording implies that the ones we do see will be based on some of the classic finishing moves from the game, instead of entirely new creations.

It’s been quite a big week for the Mortal Kombat movie. Just a few days ago, it was revealed that martial artist and actor Joe Taslim (The Raid) had signed on to play Sub Zero. This excellent casting, coupled with the news of an R-Rating and fatalities, has filled me with a renewed sense of hope for the live-action reboot.

Mortal Kombat is being produced by James Wan (The Conjuring, Aquaman) and is the feature directorial debut of Simon McQuoid. It was officially announced back in 2016, though Warner Bros had been trying to get a reboot off the ground since 2011.

Greg Russo finished the script back in February this year, while McQuoid previously told ABC that they’ll likely take certain artistic licenses with the Mortal Kombat IP if it means being able to tell a fresh, surprising story.

Aside from Taslim as Sub Zero, we have no idea which other characters will appear in the movie or who’ll be playing them. We’re also not sure where the plot will go, but as long as there are faithful, gory big screen fatalities, I reckon there’ll be a lot of very happy cinema goers.

One of the big joys in seeing Detective Pikachu for me was not really knowing which Pokemon I was going to see on the big screen until I got in there, so I’d imagine Mortal Kombat fans feel the same way about these fatalities. Slightly less wholesome, but just as valid. 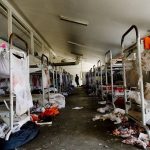 Mark KellySeptember 21, 2020September 21, 2020
Tourism officials are optimistic about travel resuming next month under a long-term visa program despite...
END_OF_DOCUMENT_TOKEN_TO_BE_REPLACED