Police have arrested two more bombing suspects and believe a group of 15 suspects were involved in last Friday’s bombing incidents in Bangkok.

The arrest of the latest suspects followed the earlier arrest of two men, who allegedly placed a dud bomb in front of the Royal Thai Police Headquarters.

The latest suspects were arrested in Su-ngai Kolok district of Narathiwat province and were identified as Muhammad Ilham and Muhammad Sai. Both were trying to escape across the border into Malaysia. They allegedly provided the bomb to the first suspects arrested, identified as Lusai Sae-ngae and Wildon Maha. So far, four out of the 15 suspects have been arrested. The suspects arrested most recently were questioned at the Royal Thai Police Headquarters’ Operations Center.

Deputy Prime Minister Gen Prawit Wongsuwon said the police were conducting investigations into various pieces of evidence and initially believe the bombing suspects to have been connected with southern perpetrators and were well prepared.

Prime Minister/Defense Minister Gen Prayut Chan-o-cha said the police investigation has made much progress, given the evidence and witnesses, so that suspected perpetrators will be brought to justice.

Bangkok Governor Pol Gen Assawin Khwanmuang visited the injured road sweepers of Suan Luang district at Sirinthorn Hospital. The road sweepers injured in one of last Friday’s bombing incidents were identified as Sunthorn Rodsianglam and Ms. Disana Phongsisai and have been treated at Sirinthorn and Vibharam Phatthanakarn Hospitals.

They are recovering well. The Bangkok governor granted each of the injured a sum of money in moral support. 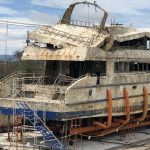