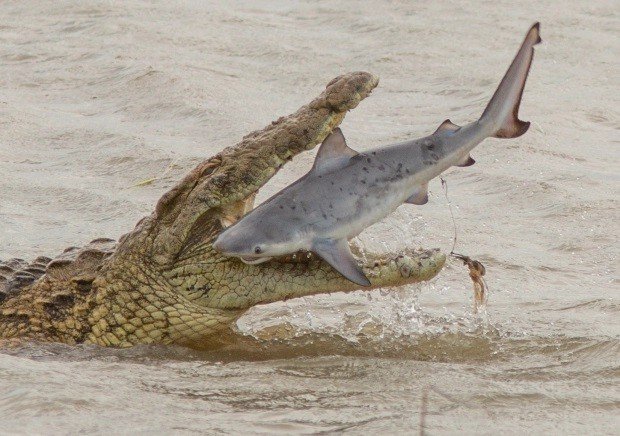 EXTRAORDINARY pictures have captured the moment an enormous 1,500lb crocodile consumed a bull-shark in just one mouthful.

Taken along the east coast of Australia, the crocodile can be seen approaching and then devouring its prey in an unlikely meeting of two apex predators.

The bull-shark, which can grow to about seven feet in length, is pictured being tossed into the air with its grim fate imminent.

Once flipped upside down and locked between the jaws of the crocodile, there is sadly no escape as it meets a sorry end.

Crocodiles are known for having the most powerful bite in the animal kingdom, with some species able to exert a force eight times greater than that of a great white shark.

The once-in-a-lifetime moment was captured by Australian research scientist and photographer Mark Ziembicki.

According to the 46-year-old, the recent opening of the Saint Lucia estuary in South Africa, coupled with excessive rainfall in the East Australian area, were the likely factors that enabled such a meeting to take place.

The photographer managed to capture the impressive images a mere 60 feet away, with sightings of bull sharks particularly rare.

Crocodiles are partial to the odd shark now and again.

In February incredible footage was filmed by Yvonne Palmer, who had reeled in the baby shark with a fishing rod in north Queensland, Australia.

Yvonne had tried to put the shark back in the water until she saw the huge croc lurking.

But she did not expect the beast to come out of the sea and onto the beach to enjoy a lunchtime snack.

Posting the clip on Instagram, she said: “Check out this monster … holy smackers.

“I just caught a shark, which I couldn’t get back into the water because this fella was coming and now he’s going to come and eat it and I am going to s**t myself.”

Yvonne says she was shaking as the crocodile munched the still-flapping shark “less than 10 metres” away from her.

The beachgoer estimated that the massive reptile was around four metres (13 feet) long – although part of his tail was still underwater. 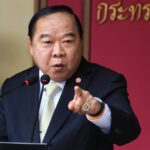 Drought Is Not A Disaster Says Deputy Prime Minister 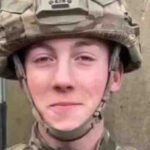