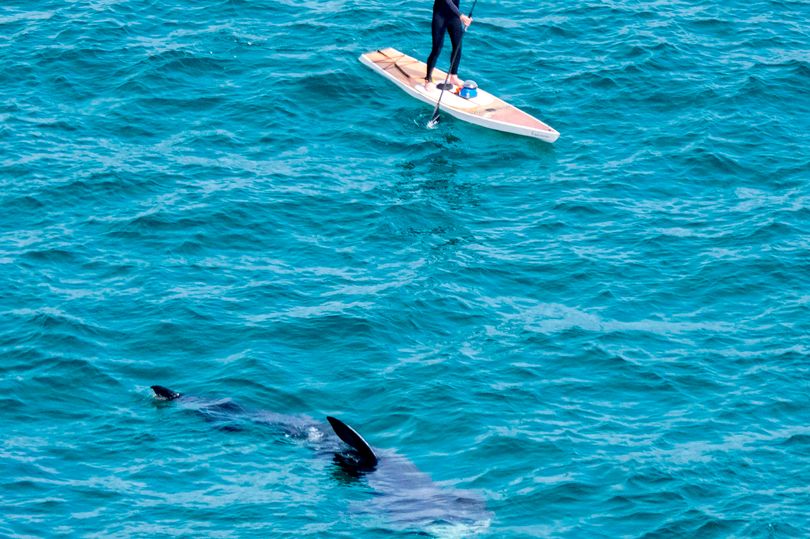 Dramatic pictures capture the hair-raising moment a paddleboarder is circled by a group of 20ft-long basking sharks while enjoying the clear waters of Porthcurno, Cornwall

A paddleboarder was captured being surrounded by 20ft basking sharks in dramatic pictures taken off the Cornish coast.

The marine animals – which are the second-largest living sharks – can be seen circling around the paddleboarder in Porthcurno, Cornwall.

Michael Amos, 20, from Penryn, Cornwall, took the pictures and said far from being scared it was a “privilege” for him to get a view of the incredible sea predators.

It comes amid multiple sightings of basking sharks off UK coasts, with the most recent ones occurring in neighbouring Torquay Marina, Devon, as well as in Falmouth, Cornwall.

Michael, a marine and natural history photography student, said: “I spent over an hour photographing them in perfect conditions.

The clear water at Porthcurno allowed me to get great views of them swimming at the surface.

“In one of my photos, you can see one of the sharks swimming right next to a paddleboarder, which gives a sense of scale to show how big these sharks can be.”

A basking shark sighting had been at the top of the student’s bucket list for some time, so he says he was so excited to eventually experience a sighting of the amazing animals.

He added: “I have seen dolphins and seals down here, but I never thought I would get to see a basking shark. So seeing so many in one place at the same time was incredible.

When looking back at my photos, I feel ecstatic that I had been able to photograph such an amazing sighting.

“Photographing marine life can be tricky if you are not underwater and have to rely on animals appearing at the surface, so I felt truly privileged to come away with these photos.”

Paddleboard instructor Owin Wong described his sighting of a basking shark in Torquay Marina in mid-May.

He said he was out with a group of four novices when they thought they saw two dolphins circling – and then heard people shouting ‘Shark! Shark!’ from the harbour wall.

He told Devon Live : “It was very, very big. It was scary at first but I have had previous knowledge of basking shark and I know that they are not dangerous.

“I told any of the boarders who were worried to kneel down and just take it in – what an amazing experience to see this fabulous wild creature up close. 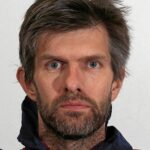 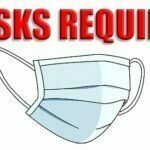