A bed-ridden mother and her two children were injured when their grocery store in Nakhon Ratchasima’s None Sung district was engulfed by a fire early on Friday.

Firefighters rescued the three and took about 30 minutes to put out the fire after they were called to the blaze at 5.1 am in a community in Tambon Loomkhao.

The three suffered severe burns and were rushed to None Sung district hospital.

The shop owner Prateep Thosungnone said he was opening up in the morning when he saw a wall plug sparking and a fire starting. The fire spread quickly to bottles of petrol that he resells, he said. Prateep said he ran out to call for the neighbours to help put out the fire. Meanwhile, his two children tried to evacuate their bed-ridden mother but all three were all trapped by the fire. 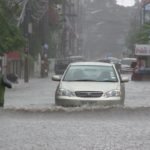 Phitsanulok hit by flash floods after hours of downpour