Millions of Thai people have presented sandalwood flower in respect.

More than 19.1 million people across Thailand offered sandalwood flowers in homage to their late King Bhumibol Adulyadej on the day of his Royal Cremation on Thursday.

The offerings were made at 878 officially prepared venues across the country. The Interior Ministry’s command overseeing sandalwood flower centers disclosed the figures on Friday.

At up to 2.9 million people laying sandalwood flowers, Bangkok had the highest number of mourners doing so. Every venue for sandalwood-flower placing was overcrowded on Thursday, said the Ministry. Source: Nation 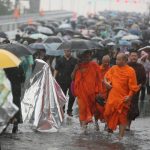