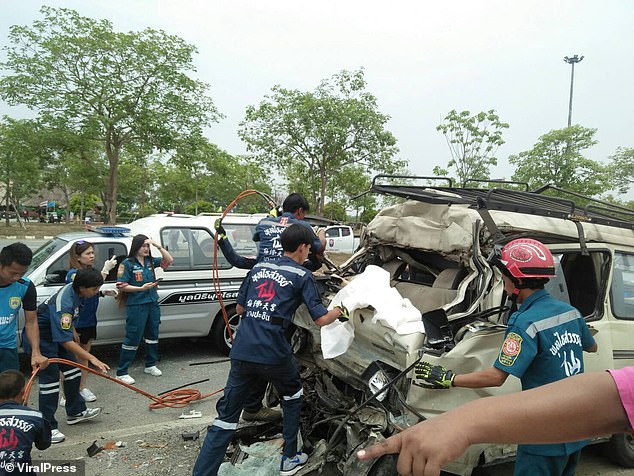 Millionaire British doctor, 87, is killed after ‘fainting at the wheel’ and ploughing into the back of a lorry in Thailand days after a hospital visit.

A millionaire British doctor has been killed in a horror car crash in Thailand after ‘fainting at the wheel’ just a week after refusing to be admitted to hospital.

Michael Hawkins, 87, was driving alone in his Mitsubishi Delica minivan when he ploughed into the back of a parked lorry at around 12.30pm yesterday.

The pensioner, originally from Woking, Surrey, who has grown up children, was killed instantly.

Rescue workers arrived and had to cut Mr Hawkins’s body from the wreckage.

Officials are now investigating what caused the smash in the Bang Pa-in District of Ayutthaya, 40 miles north of Bangkok.

They said yesterday they believe Mr Hawkins was either using a phone at the time of the accident or more likely that he fell asleep or lost consciousness while driving.

Yesterday morning, Mr Hawkins’s 90-year-old wife Salipan – who has connections to the Thai Royal Family – was not at home as she had visited hospital to collect his body and arrange a Buddhist funeral.

But speaking this morning at Mr Hawkins’s approximately £12million family estate, close friend Khun Wichian said the pensioner had recently been suffering from cardiomegaly, causing him to faint last week.

He had visited hospital last week but defied requests from medics to be admitted – telling them he was ‘fine’ and returned home.

Wichian said: ‘Michael and his wife are a kind and lovable couple. The family is honoured and well-known in Thai society.

‘Before the accident Michael wanted to have repairs done on his minivan, but the mechanic shop was closed on Sundays, so he decided to drive to Ayutthaya to buy some spares.

‘His wife was very worried because she hadn’t heard from him for two hours. (a bangkok jack report) Then the rescuer called her telling her that her husband was seriously injured from a shocking car crash.

‘Her cousins offered to go to the hospital because she is very old and it would be bad for her to see him in that condition. But she also went.

‘We knew that he had passed away but we did not want to tell his wife until she reached the hospital herself, as she’s very old and frail.

‘Last week, Michael also fainted in his own house. He was sent to the hospital but refused to stay overnight there. He said he was fine. So the family thought that he fainted again while he was driving as well.

‘Michael loved his pet parrots and he liked making model aeroplanes in his spare time. He was close to his family and his children are flying here for the funeral.’

A worker from the Putthaisasawan Foundation who attended crash scene said they also believed Mr Hawkins had ‘fallen asleep or passed out’ at the wheel.

Mark Insee said: ‘The trailer truck was parked on the hard shoulder at the time and Mr Hawkins crashed into it at full speed.’

‘We believe there are two possible reasons for the crash. The driver may have been using his phone at the time or he could have fallen asleep or passed out.

‘There was nothing in his belongings to suggest he had a health condition but the body will be sent for an autopsy to check.’

Mr Hawkins, who was also known as Mike, had his driving licence, business cards, a copy of his passport and 2060 Thai baht (£50) in cash on him.

Locals said Mr Hawkins’s wealthy family owned the entire street of houses – worth around 500 million baht (£12million) – plus a restaurant and other assets.

His daughter, Lucy Hawkins, 53, lives in Lyndhurst, Hampshire, and is also an appointed director of the building.

Police Lieutenant Kritsana Chanithai said: ‘Notification was received of a traffic accident at 12:40pm. At the scene was a green Mitsubishi and a trailer truck.

‘One male was deceased. He was stuck in the vehicle. Cutting equipment was used to remove the body of the victim to be delivered to Bang Pa-in hospital.

‘The body has been sent for an autopsy to assist with the investigation into what caused the accident.’

Mother’s Day: Why is it celebrated on different dates? 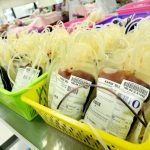