The commander of the 2nd Infantry Regiment Royal Guard has urged calm after a campaign of distorted information was launched online concerning the presence of armored vehicles in public areas, explaining that the movements are part of an annual training operation.

2nd Infantry Regiment Royal Guard Commander Maj Gen Piyapong Klinphan refuted speculation online that armored vehicle movements were a cause for concern, saying that the equipment being moved is part of an annual training exercise involving vehicles from Lopburi. The training began on February 1 and is to conclude on February 21.

He further elaborated that his regiment has vehicles and equipment stationed in Sa Kaeo, Prachinburi and Chonburi. All of the equipment and personnel from the stations were required for the training with transportation taking place at different times to avoid traffic congestion. The movements began on January 31 this year with troops from Sa Kaeo traveling via Prachinburi to Saraburi and Lopburi, from Prachinburi through Saraburi and Lopburi and from Chonburi via the Motorway to Lopburi.

Signs have been placed on the vehicles to explain their presence. Maj Gen Piyapong noted that photographs and video clips of the vehicles were shot so as to conceal the signs, indicating a clear intent to distort the facts.

US warns Hungary, other allies to shun business with Huawei 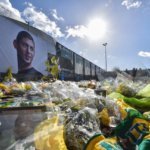