The creator of these urinals has fitted special glass panels which allow users to see people walking outside, but those on the outside cannot see them.

“Many first-time users are shocked to see people milling on the outside, but they laugh when I tell them that it is just a gimmick,” a park attendant told Matichon.

Urinals are provided for male users in most Western countries. 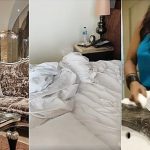