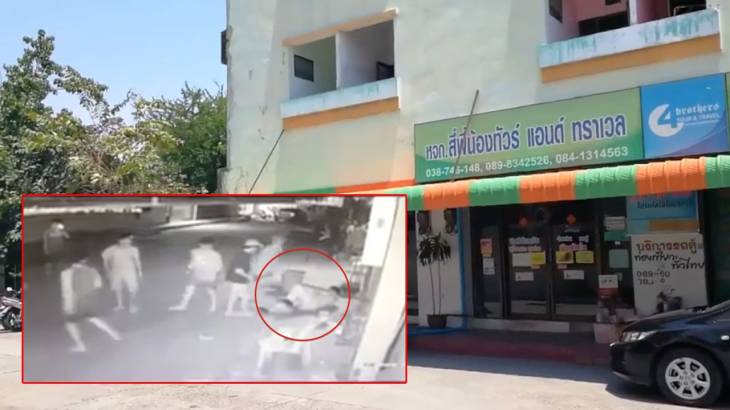 Video footage has emerged of a sickening attack on a security guard during Wan Lai celebrations in Bang Saen last week.

And to make matters worse the guard who was attacked by about ten men is handicapped after suffering from polio.

Guard Chartchai Songkhao, had initially tried to stop a man and a woman from urinating out front of some flats where he was on duty.

He told them not to do that and an argument developed.

Soon a group of friends approached Chartchai to assault him. The CCTV footage showed him trying to get away before being repeatedly beaten with fists and feet.

He also has objects thrown at him in the sustained attack that lasts about a minute. One man kicks him as he lies on the ground defenseless.

The footage is now being shared across social media in an effort to track down the cowardly men who attacked the guard.

Thai Rath discovered that the attack happened on the 17th of April and was reported to police the next day. So far there have been no arrests.

But the Chonburi head of police Somprasong Yenthuam has visited the victim who is still in hospital and promised that the attackers would be brought to justice.

Chartchai needed 14 stitches in a head wound and a further four stitches to a cut by his right eye. He told reporters that he only has limited use of one arm after suffering from polio.

He was thus unable to offer much resistance to the attack. He said that he tried to stop the people from urinating fearing that his boss would scold him if he did not do his duty.

Chief Somprasong has urged the Saen Suk police to solve the case. He said that it looks like the attackers were local men and it should not be difficult to find them.

“I would urge these men to give themselves up – it will be better for you to do so,” he said.

“If anyone has information about these men they can contact us under conditions of anonymity”, he added. 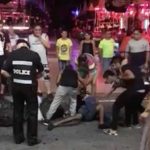 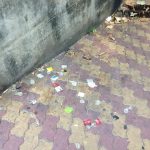