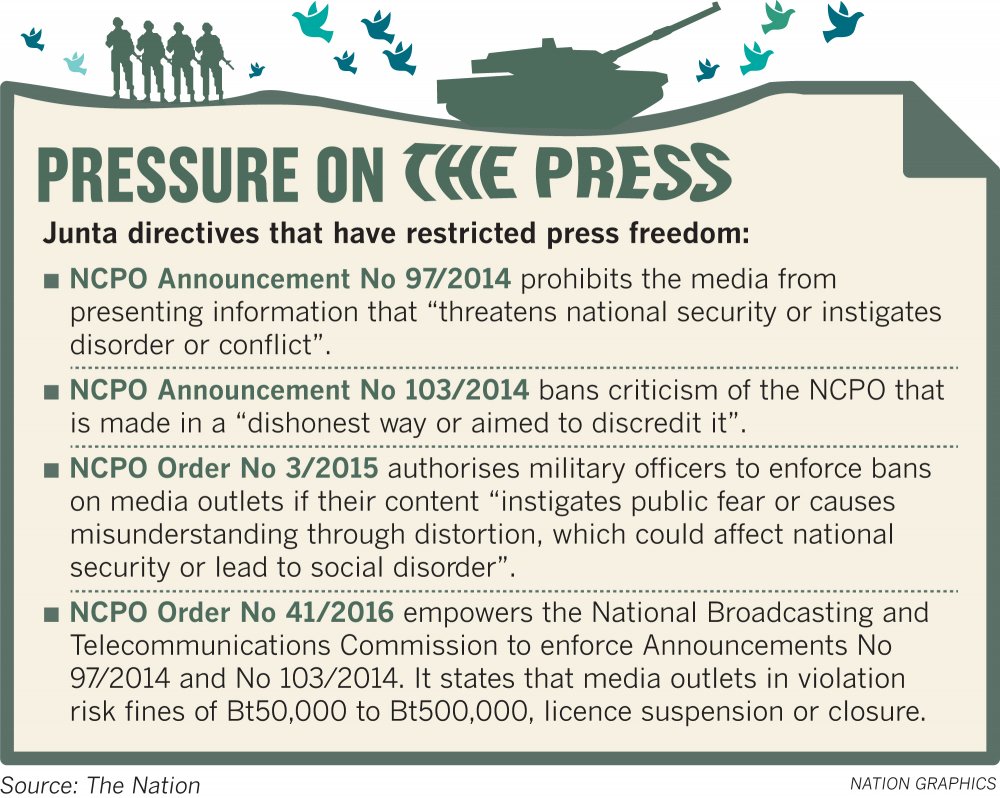 Through its orders, NCPO has managed to rein in outlets.

THOUGH there are no longer military personnel posted at media outlets, unlike during the period following the military coup on May 22, 2014, a tight grip on media has been maintained more surreptitiously via junta laws and orders.
Journalists and media groups have complained about restrictions on press freedom under the junta, which has been in power for four years. Media groups contend that freedom has been curbed by the National Council for Peace and Order (NCPO) through its orders and announcements.
Even a junta plan to reform the media, as part of national reforms, is viewed as an attempt to control free flow of information. The plan calls for the issuance of a new law that aims to regulate the media through “promoting ethics and standards for the profession”, rather than protecting freedom of the media against many existing restrictive laws such as the Computer Crime Act. On World Press Freedom Day on May 3, media associations called on the NCPO to revoke its orders and announcements deemed to restrict freedom of the press. Among some 800 orders issued by the junta over the past years it has been in power, several have restricted media freedom. In many instances, those orders and announcements were used to close – temporarily or permanently – TV stations critical of the NCPO and its government. Among those targeted were Voice TV, Peace TV, TV24, DMC and Fah Hai TV. Most of them are linked to the red shirts and are satellite-based, except Voice TV, which is a digital channel run by former prime minister Thaksin Shinawatra’s son Panthongtae. In addition to media outlets, authorities have also censored news websites by blocking access to them. Critical journalists have been summoned by the junta for “attitude adjustment” sessions at military barracks, among them former senior Nation reporter Pravit Rojanaphruk. The junta’s tough actions have caused the mainstream media to turn to self-censorship.
The restrictive orders will also affect the media and journalists after the junta has left power, since they will be inherited by the post-coup government. Orders issued by the coup-makers are regarded as laws and could prove difficult to rescind. For example, it took a 14-year campaign by media groups before an elected government in 1990 rescinded the restrictive National Reform Council Order No 42 (“Por Ror Sisib Song”). The order, issued after a military coup in October 1976, prohibited newspapers from publishing any content deemed threatening to national security or damaging to the government, the country or the Thai people as a whole. It also empowered authorities to withdraw the licence for publishers, editors and owners involved, which led to newspapers being closed down. Media associations also campaigned against moves perceived as attempts to control the media through legislation passed under the guise of “media reform”. They protested against a bill proposed by the National Reform Steering Assembly that would require licensing of media professionals and a regulatory committee that would include top bureaucrats. Media cried foul and pointed to the possibility of state interference. The bill later was discarded, but a similar law is in the making after the formation of the National Reform Committee on Media and Information Technology, which includes some prominent media personalities. The junta’s master plan for reforming the country in 11 areas, including the media and IT, has been in effect since April 6. Promoting media ethics and standards are some of the aspects in the reform plan. The new legislation, on the Promotion of Media Ethics and Professional Standard, is being drafted and is expected to be enacted within this year. Called the “media control law”, this bill has been strongly opposed by the Thai Journalists Association and other media professional groups. Over the past four years, the junta has managed to control community radio stations that were often used to spread political views and mobilise political support before the coup. As a result, many “red shirt” radio hosts moved online, setting up news channels on YouTube. But they have to run their programmes from outside the country. In the meantime, Thailand has seen the birth of new media outlets since the coup, including BBC Thai, Standard and The Matter, whose online articles have been critical of the junta. On the international front, Thailand’s image over the past four years has taken a beating with freedom of the press on the decline. Reporters Without Borders called junta leader General Prayut Chan-o-cha a “press freedom predator” and accused the NCPO of keeping journalists and web bloggers under permanent surveillance.The NCPO “often summons them for questioning and detains them arbitrarily”, it said. The international media watchdog’s 2018 World Press Freedom Index ranks Thailand at 140 out of 180 countries, slightly better than last year when the Kingdom was at 142. Thailand was ranked 136 in 2016, 134 in 2015, and 130 in 2014. NTN – EP

Foreign prisoners to be transferred home