Police have launched a manhunt for the driver of a student van alleged to have deliberately hit a motorcycle, killing a teenaged pillion rider and badly injuring the bike driver late on Thursday night.

Suspect Warot Chusung, 36, who drives a van for a school in Bangkok’s Taling Chan district, appeared to be drunk at the time and deliberately hit the bike, police quoted witnesses as saying.

The dead pillion rider was identified as Jitisak Suksujit, 15. He was riding on the back of a motorcycle driven by Weerapol Sashae, 23, who was severely injured.

Police said the two were speeding as they chased after the van driven by Warot after he caused havoc by hitting several vehicles on a soi in Taling Chan, where the Alongkorn Apartment are located. The two apparently tried to cut in front of the van to force it to stop but were hit.
Before the crash, witnesses said, Warot drove his van to the apartments to look for his estranged wife but did not find her. While leaving the soi, he hit a motorcycle.
When local residents tried to block his way with marble seats, he hit them to force his way through before then hitting a Mercedes car. Witnesses said the two victims then rode their motorcycle after the van before they were hit. NT – EP 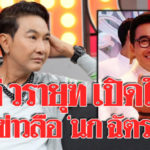 Thai women warned: “Don’t try to be beautiful on the cheap” as eyebrow mishap goes viral!