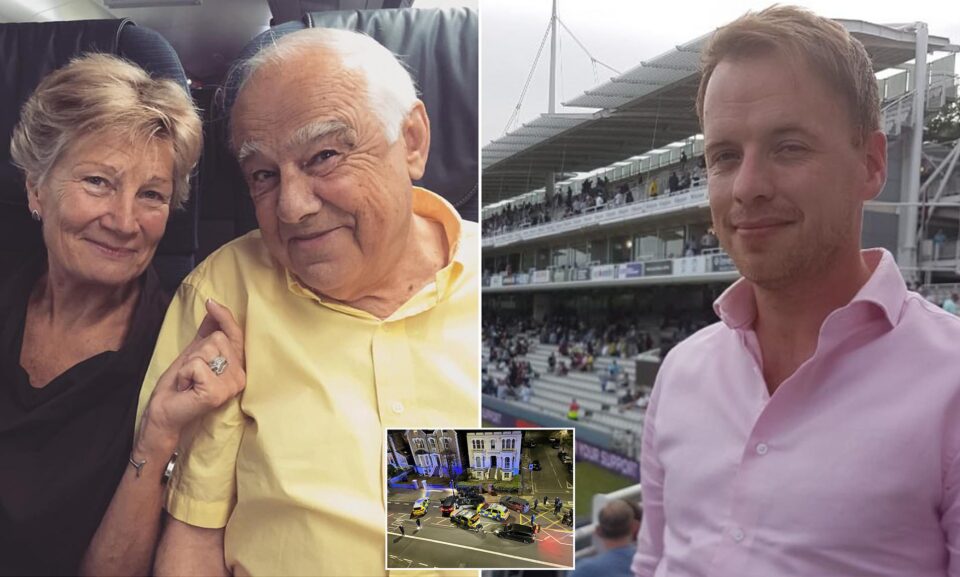 A man who stabbed his millionaire stepdad to death and paralysed his own mother told a court he snapped when she branded him a ‘drunk like your father’.

Thomas Schreiber, who lived with his mother Anne, 66, and her husband Sir Richard Sutton, 83, said lockdown left him living in a ‘pressure cooker’ home.

The former salesman, 35, had ‘never been close’ to his super-rich stepdad after being upset when his mother split from his own father years earlier.

He felt the baronet treated him unfairly compared to his two sisters despite receiving a £1,000 monthly allowance and £100,000 towards buying a house.

The court has heard that family arguments often descended into violence, including once when Sir Richard hit the defendant with his walking stick in November 2020 during an argument over whether his sister should get a chandelier, causing the cane to shatter.

On another occasion Schreiber hit his mum and pulled her hair when she called him a ‘f***ing leech’.

The jury previously heard how Schreiber living with the couple at the sprawling country estate became a ‘vicious triangle’ that got ‘worse and worse’ during lockdown.

But Schreiber ‘lost it’ and went ‘completely crazy’ when his mum compared him to his late father on the eighth anniversary of his death on April 7 this year.

Schreiber wanted to have a toast and had laid out some nibbles with Sir Richard when his mother made the remark, triggering an ‘uncontrollable explosion’ of violence.

The aspiring painter plunged a knife 12cm into Sir Richard’s heart and stabbed his mum so many times she was left paralysed from the neck down and breathing through a ventilator.

He told the jury: ‘Richard and I were sat very peacefully in the office when mum came in and took one look at me and said “you’re drunk, you’re drunk just like your father.”‘

‘I shouted “I’m not, I’m not drunk” and then she stormed off in to the kitchen and I punched her on the arm or on the back.

‘I hit my mum with my fist on the back and there was a knife out of place to the left of the island.. out of the knife block.

‘I just went completely crazy and I saw the knife and a voice shouted in my head “attack, attack”.

Schreiber has admitted manslaughter over the hotelier’s death at his Moorhill estate near Gillingham, Dorset, but denies murdering him.

He pleads not guilty to the attempted murder of his mother.

The defendant said the death of his father, an alcoholic who suffered with depression, was ‘very sensitive’ as he felt like he had failed him.

He said he ‘loved his mum’ and ‘wanted to hug her’ but turned into a ‘monster’ when she taunted him.

‘We had some tricky times but I didn’t want to hurt her… she’s my mother, we were joined at the hip. I wanted to hug her,’ he said.

‘It sounds crazy I know. I didn’t want to hurt my mum but I couldn’t physically stop what I was doing.

The prosecution allege that Schreiber knifed the pair after fantasising for months about their murders.

The jury has previously heard that the defendant sent messages to his girlfriend and his friend saying he wanted to burn down the house with the adults inside, and that he thought about ‘murdering them morning, day and night’.

On Friday, voice notes were played to the court in which he expressed his contempt for the couple

And he said of his stepdad: ‘He’s a multi multi-millionaire, he’s never had to work a day in his life, he inherited everything, all property, all land basically around the world. He’s an absolute c***’.

The defendant said that at ‘fleeting times’ he was ‘consumed with hatred’ and wanted ‘revenge’ on his mother and Sir Richard, but not on the night of the attack.

He denied being angry when went on the stabbing spree, telling the court: ‘What happened on 7th April was more than anger, it was an explosion, an uncontrollable explosion, a complete loss of control… that’s not who I am, that’s not me and I have been angry before but I have never lost it like that before.’

He said the messages were a ‘cry for help’ after feeling suicidal during lockdown.

‘I was really struggling, every day was a continual struggle, suicidal thoughts morning and night, “What is the point of going on? My family hate me, I’m a failure like my father and everything is just terrible.”‘

He added: ‘I love my mother, I love my sisters and I love my family, this is not who I am as a human being, I was not well and unfortunately I was too much of a coward to seek help.’

After the attack Schreiber said he sat on a sofa in the dining room in ‘total shock’ and ‘complete horror’ as he realised what he had done.

He said he decided to end his life so fled with a suitcase he had already packed for a cancelled holiday and another knife from the kitchen.

He has also pleaded guilty to dangerous driving on the night of the killing, after he fled in a Range Rover and was captured by police after a 135mph high speed chase from Wiltshire to London.