A man wanted in connection with the stabbing of a woman and an 11-month-old boy in west London has handed himself in to police.

Rehan Khan, 25, was arrested and taken into custody after attending a west London police station this morning.

It follows what Scotland Yard describes as a “double attempted murder in Feltham”.

A 32-year-old woman and an 11-month-old boy were found with stab injuries at a house in Swinfield Close on Monday evening.

The boy remains in a critical but stable condition, police said.

The woman’s injuries are not life-threatening.

An air ambulance took the pair to a nearby hospital for treatment, while officers and police dog handlers scoured the crime scene.

One witness, June Heart, told Sky News: “I had just got home from work, and parked the car when I heard a lot of shouting. I can still hear the mum screaming for help. It was horrible. I haven’t heard anything like it.

“A few minutes later the street was full of police and ambulances. There was a specialist paramedic there too. I was told by a policeman with a gun to get in my house and stay there. Two helicopters were hovering above the street too.” 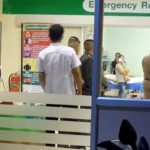 ‘My stepfather did this to me’, says raped, autistic 11-year-old

China offers to buy $70 billion in US goods: official