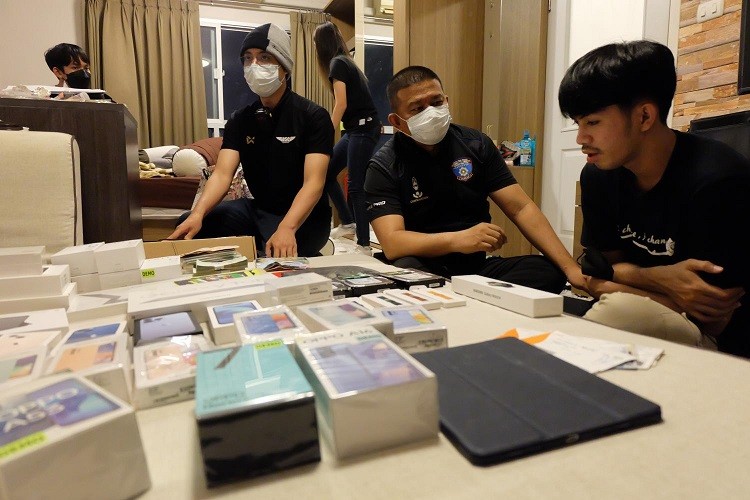 Police recently arrested a serial phone thief who targeted branches of the Banana IT store chain in many provinces. CCTV footage caused interest in the felon to surge as in each case it showed a man wearing nothing but underpants committing the crime.

He was soon dubbed “Robin Hood in underpants” after it was revealed that he had given many of the phones to homeless people.

It was one of the strangest cases that his team has ever experienced, according to Pol Maj Gen Theeradet Thamsuthee, investigation chief for Provincial Police Region 2, who led the unit tasked with tracking down the underdressed thief. The pant-clad anti-hero was identified as Jeh Issamaeh Hama, 23, also known as Khamas. He was arrested on July 4.

It all began after the cyber police were alerted to an incident at a Banana IT shop in Muang district of Nakhon Nayok on July 3. At around 3am, Khamas allegedly broke into the shop and made off with 128 items — mostly mobile phones — worth 1.91 million baht.

The thief also disconnected CCTV cameras and escaped by a prearranged route in an effort to make police think he was a local, said Pol Maj Gen Theeradet. But when they reviewed CCTV footage, they found that the man had scouted the area before committing the crime.

Crime records for the area showed there had been a number of similar thefts during the past 8-9 years. After combining their own work with analysis from the Police Cyber Taskforce, the investigation team were able to learn that the thief was a native of Narathiwat province who had first been arrested for stealing when he was just 14.

Subsequently, police learned the man was wanted on three warrants issued last year by Yala Provincial Court on Feb 4, Songkhla Juvenile and Family Court on May 27 and Phatthalung Provincial Court on April 23. An additional one was issued by the Min Buri Criminal Court on Jan 20 this year. He had committed several crimes including stealing, damage to property and trespassing.

Acting on a tip-off, officers arrested Khamas on July 4 at a rented room in Bang Kapi district of Bangkok

Pol Maj Gen Theeradet told media that police found 31 mobile phones inside the premises on Seri Thai Road, while 58 more were discovered in another room the suspect rented on Ramkhamhaeng Road in the same district.

The man was about to leave for Narathiwat with the stolen phones when he was caught, Pol Maj Gen Theeradet said.

The suspect was accused of stealing from a Banana IT shop in the southern border province of Yala on Jan 27, 2021, and from another of the chain’s outlets in Sai Mai district in Bangkok on Jan 9 this year.

The man admitted his guilt.

He allegedly told police he stole only from Banana IT shops because he liked bananas and the colour yellow. He said he wore only underpants because dressing that way made him feel like “himself”.

The suspect was also quoted as telling police that he disconnected and stole CCTV cameras along with the phones because media outlets used to call him “a pervert thief in underpants” which he did not like so he had wanted to remove any record of him just wearing underpants.

Pol Maj Gen Theeradet said the suspect searched for Banana IT shops using Google Maps and would scout the area around 3-6 hours in advance.

The man also told police that he stole mobile phones because he did not have one during his childhood, unlike his friends.

During questioning, Khamas said he had given phones and money to homeless people at Hua Lamphong railway station and Sanam Luang in Bangkok, and also to people in his home province of Narathiwat, as he too had been homeless once. The suspect also allegedly stole from Banana IT outlets in Songkhla, Prachuap Khiri Khan, Phatthalung and Nakhon Si Thammarat provinces in the South, and in Nong Bua Lam Phu and Ubon Ratchathani provinces in the Northeast.

Pol Maj Gen Theeradet said the suspect was a brilliant student who was studying law at university and was very close to obtaining a degree with distinction. However, due to his poor financial status, the man had struggled to make ends meet for a while.

Pol Maj Gen Theeradet noted that in most cases of phone theft, police can easily track down the stolen phones from the vendors who bought them, but in this case, it was much harder as so many had been given away.

But they caught their man in the end, although the whereabouts of the rest of his clothes remain a mystery.

Jeh Issamaeh Hama (right) and some of the goods he stole from the Banana IT store in Muang district of Nakhon Nayok. He was arrested by a team led by Pol Maj Gen Theeradet Thamsuthee (centre) on July 6, 2022. (Royal Thai Police photo) 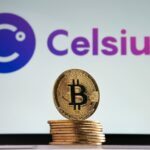 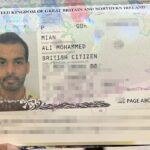