A 22-year-old man who was left in a coma after he had his penis bitten off by a dog had reportedly covered his genitals in peanut butter before the attack. A source told the Times that the man was alone with the dog at the time of the incident and that ‘he applied peanut butter, or another food spread, to his crotch area before the attack took place’.

The man, from East Lothian, Scotland was found by cops on 7 October in a pool of his own blood and was rushed into Edinburgh Royal Infirmary, but his genitals could not be re-attached.

The dog, an Old English Bulldog called Biggie Smalls, was reportedly found covered in blood and was taken away by police and placed in kennels.

A Police Scotland spokeswoman said: “Police in East Lothian are investigating after a man suffered serious injuries, believed to have been caused by a dog, in Haddington on Sunday.

“Emergency services were called to a property in the High Street area at around 2.30pm.

“A 22-year-old man was taken to the Edinburgh Royal Infirmary by the Scottish Ambulance Service, and later transferred to the Western General Hospital where he remains receiving treatment.

“Inquiries into the full circumstances are ongoing.”

Following the incident, the dog was put to sleep.

A spokesperson from Police Scotland told the Sun: “Inquiries are continuing to establish the full circumstances of how a 22-year-old man sustained significant injury to his groin area, while within an address in Haddington on Sunday October 7.

“However, as part of this investigation the owner of the dog which is believed to have been involved has voluntarily signed documentation consenting to the destruction of the animal.

“This has now taken place after protracted dialogue between the Crown Office, Scottish SPCA and the East Lothian Council Dog Warden.”

The man is now said to be conscious and recovering in hospital where he reportedly helping to assist police.

Police confirmed to the Sun that nobody has been charged with any offence. 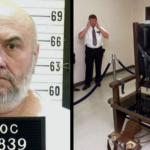 Fetish Model Makes £100,000 A Year Selling Used Socks And Shoes Over The Internet