Malaysia’s lower house of Parliament on Thursday passed an amendment to end the country’s mandatory death sentencing of drug traffickers.

But the move comes too late to save a Japanese woman who is currently on death row for smuggling drugs, as the new law will not be applied retroactively. The bill, which next goes to the Senate and then to the king for endorsement, would allow judges the discretion to either impose the death penalty or sentence a convicted person to life imprisonment and not less than 15 strokes of the cane. Previously anyone found guilty of trafficking over a certain amount of dangerous drugs was automatically sent to the gallows.

The former law was Section 39(B) of the Dangerous Drugs Act 1952 (quoted here in part):

(1) No person shall, on his own behalf or on behalf of any other person, whether or not such other person is in Malaysia –

(a)traffic in a dangerous drug…

(2)Any person who contravenes any of the provisions of subsection (1) shall be guilty of an offence against this Act and shall be punished on conviction with death.

“The government is pursuing the amendment because it wants to see if, by giving the court the power to decide, it would help with the war against drugs,” de facto law minister Azalina Othman Said told parliament, according to the official news agency Bernama.      She told the House of Representatives Thursday that despite various drastic measures taken by the government, the number of drug cases continues to rise.                    Between January 2014 and October this year, she said, the police have detained 702,319 people for drug trafficking and possession.

Of this, 21,371 cases fell under Section 39B of the Dangerous Drugs Act 1952 that used to carry the mandatory death sentence, and 10,878 people have already been charged in court under that section. Before imposing the life imprisonment and caning penalty under the proposed new law, the court must have the public prosecutor certify in writing that the person convicted has assisted law enforcement agencies in disrupting drug trafficking activities. The court must also take into consideration whether the culprit was merely a drug courier and was not involved in buying and selling of the drug and there was no involvement of agent provocateurs.

Japanese citizen Mariko Takeuchi, 43, could be the last person hanged under the old law. She was found guilty of by the High Court in 2011 of having trafficked 3.5 kilogrammes of methamphetamines into Malaysia via the Kuala Lumpur International Airport on Oct 30, 2009. Under the 1952 act, anyone found possessing a minimum of 50 grammes of methamphetamine is considered to be trafficking in a dangerous drug, which is punishable by death.

In March, 2013, Takeuchi failed to get the appellate court to overturn her conviction and she took her case to the apex Federal Court, which in October 2015 ruled against her and sealed her fate. “Unfortunately, the amendment is not retroactive. Too late for Mariko,” her lawyer Hisyam Teh Poh Teik said. A former nurse, Takeuchi testified that she did not know about the drugs found in a suitcase she brought to Malaysia from Dubai. She said she was carrying the suitcase as a favour for an Iranian acquaintance.

Takeuchi, who has been incarcerated since her arrest, is the first Japanese national to be tried on a drug trafficking charge in Malaysia and the first sentenced to hang. Hisyam said her last resort is to seek a pardon from the Sultan of Selangor state. Meantime, Takeuchi is being held at a women’s prison in northeastern Kelantan state next to Thailand. Source: Bangkok Post 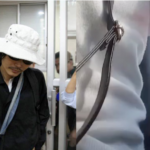