Home » The making of an anti-government protest leader 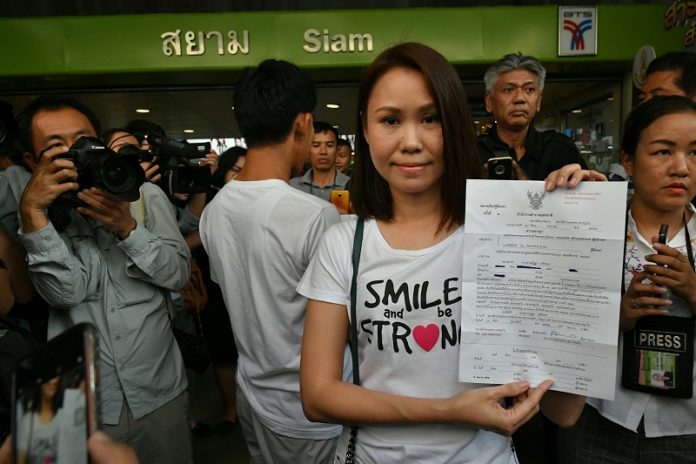 Answering a reporter’s question about what she thought of having her Tuesday news conference shut down, leader, Nuttaa Mahattana minced no words.

“What the NCPO did today was violate press freedom,” she said, referring to the ruling junta by acronym.

The 39-year-old anti-junta activist had been only a few minutes into her comments at an impromptu news conference at the Foreign Correspondents’ Club of Thailand when she was interrupted.

“You can’t have a press conference,” a man called out. “I’m sorry to do this, otherwise the place will be shut down. Sorry guys.”

The voice was not that of a police officer or soldier, but a former president of the club where Nuttaa, better known by her nickname Bow, chose to answer reporters’ questions about how she and 38 others would handle charges filed against them by junta order for staging a rally calling for elections.

Nuttaa complied with the request by BBC correspondent Jonathan Head. After all, the club – which has been pressured into canceling numerous events under military rule – was told by police that Tuesday’s event would affect “national security.”

Nearly four years after the 2014 coup, as the military regime again tries to clear the field of opposition by threatening dissidents, Nuttaa suddenly finds herself at the forefront of a movement she’s long helped lead.

A teacher and occasional TV host, Nuttaa is tech-savvy. She makes the most out of social media and livestreams from the scene to her 28,000 Facebook followers. When Tuesday’s drama erupted at the FCCT, her Facebook Live audience spiked as thousands more tuned in.

Comfortable engaging the media, Nuttaa has transformed from concerned citizen into a leader of the movement opposing junta rule. She gained visibility during a year-long public campaign to free then-lese majeste suspect Jutupat “Pai Dao Din” Boonpattararaksa, who was sentenced to two and a half years in prison for sharing on Facebook a biography of King Rama X produced by the BBC’s Thai-language service.

The mother of a 10-year-old boy – her interest in activism after the 2006 coup was sidelined by pregnancy – said in a sit-down interview Monday that she felt compelled to act. She strongly opposes the lese majeste law, which carries a maximum jail term of 15 years per offence for anyone found guilty of defaming the monarchy.

The ‘Typical Bangkokian’ Who Has Had Enough

Coming from the Bangkok middle class and having studied English at Chulalongkorn University, Nuttaa refers to herself as a “typical Bangkokian” and an “urban girl.”

She’s held numerous jobs – including doing some lifestyle programs for Voice TV and teaching English. She’s worked at the British Council and the Australian Embassy in Bangkok.

Nuttaa was among the many ordinary folks who joined anti-coup protests in the days following the May 2014 coup. If the failed campaign to free Jatupat acquainted her with the press, it was being charged with sedition and violating a junta ban of political gatherings less than two weeks ago that shot her to national fame.

Since then, the mass media has made Nuttaa – the only woman among more well-known activist leaders – the face of the movement.

Part of that may owe to her straight-backed refusal to be cowed by anyone, a camera-ready poise and photogenic smile.

A day after protesters gathered late last month to call for elections in November, 39 people who attended the rally were charged with violating the junta’s ban on political gatherings and violating the Public Assembly Act.

Nuttaa was among them, as were seven other top pro-democracy activists. They will go to be formally charged Thursday and taken immediately to a court where police will ask they be locked up without bail until their trial. Another follow-up protest is planned for Saturday at the Democracy Monument.

Taking position as a natural leader has meant facing suspicions within the close-knit, clique of activists.

Some have harbored a conspiracy theory that Nuttaa – a lone wolf who doesn’t hang out with the group and entered political activism more recently – is in fact a mole sent to spy on them.

“It’s too hilarious for me to respond to, but I must say I am not,” Nuttaa said, without elaboration.

Her rise in profile has increased the demands.

“I slept very little over the past two or three days,” Nuttaa said Monday as she sat down for an interview.

She was referring to a frantic effort to raise bond money before Thursday’s hearing. She said she’s been inundated by Facebook messages offering either moral support or money to secure bonds for her and the other protesters.

She said prosecution has steeled the movement’s resolve.

“The turning point was the day I was charged. I was surprised by the severity of the charge,” Nuttaa said, referring the charge of sedition, or inciting rebellion, with carries a maximum prison term of seven years. The other turning point was when 39 fellow demonstrators – herself included – were charged with violating the Public Assembly Act because their protest site was deemed to be within 150 meter radius of Sra Pathum Palace. That charge carries a six month jail term.

“I felt this was bullying,” she said. “They crossed the line, and I will fight to death. Everyone has a sense of justice.”

In Nuttaa’s own words, the cash donations to be used as bail surety for her and fellow protesters makes her feel she’s now working for them to free Thailand of military dictatorship.

“We are energized to fight for what is right. I have no choice, I would end up dead if I didn’t fight, so I think of myself as a person who’s already dead,” she said.

Not that she is without fear. Nuttaa readily admits she is taking calculated risks. She’s frank with her 10-year-old son, Neo, about the risks she faces.

“My son asked how many years I will have to be in prison. I told him it’s not yet certain. I said, ‘Neo, you know right, that what I did was the right thing?’”

If she ends up in prison, Nutta said her estranged Bangladeshi husband will take care of the boy.

“It’s not that I am not worried for my son,” she said.

What’s more frightening than being imprisoned, she said, is letting him see nothing has been done and letting “evil prevail over good.”

Come Saturday, a major anti-junta rally has been called. Nuttaa predicts that the impact of the charges against 39 protesters, herself included, will serve to suppress turnout – or invigorate it.

“People could become fearful or they could rise up. It’s 50/50,” she said. “Our courage will be judged as to whether Thai society is courageous or cowed.”

Nutta compares the current situation to a tug of war, where neither side is clearly winning.

“It depends on our endurance,” she said. 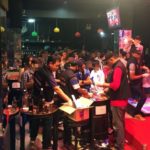 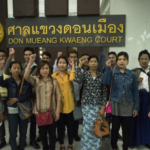