Public prosecutors have postponed until July 12 their decision whether to indict four individuals and one firm linked to the Magic Skin Co Ltd case, asking the police to find more evidence and the court to temporarily release the suspects.

Ahead of the June 9 deadline for the suspects’ detention period, the Office of the Attorney General’s Office of Economic Crime Litigation on Friday announced the result of their meeting to review the police case about Treechada armpit whitening serum, which Magic Skin had hired Hanew Korea Co to manufacture on its behalf.

The prosecutors said police investigators had to clarify many points, including a public fraud charge against four suspects in the case.

“Police have to prove how the manufacturing and distributing of such products are considered public fraud based on more forensic evidence than just a toxin test result,” prosecutors said, adding that they also must prove if the serum contained ingredients registered with the Food and Drug Administration and whether it had the properties advertised.

This case report claiming 145 people suffered from Bt113.2-million worth of damage from the product, submitted by the police early this month, recommended the prosecutors indict six defendants.

Police said all six should be charged for conspiring to manufacture and distribute fake cosmetics, which is punishable with up to two years in prison and a Bt200,000 in fine. 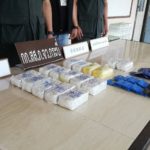