It may be a bit of a cheap shot – attacking junta leader, Prime Minister Prayut Chan-o-cha for his choice of a designer scarf during his visit to London this past week. But that was the whole idea of his critics – to get under his skin so that he or his spokesman will lose their cool and come out all guns blazing. As a generalissimo-turned-public figure, Prayut needs to learn the art of politics, or specifically Thailand’s cut-throat politics.

As career military men, neither Prayut nor his comrade in arms Deputy PM Prawit Wongsuwan is used to criticism. Over the past two years, these two men have been vulnerable to animation when provoked and have consistently snapped at reporters. Class, finesse and a dignified military bearing are nowhere to be seen when these top brass lose their nerve. Luckily,Thailand never had to go to a war under their command. One can only imagine the consequences of their leadership in times of war if their reactions during peacetime are so edgy. Prayut was a little more calm this time around, while speaking to reporters after mounting criticism from netizens about him wearing a Louis Vuitton designer scarf. The appropriateness of the scarf was not the only thing that caught people’s attention, considering his visit was in the middle of summer in Europe. What stood out was the hypocrisy of his fashion statement. It’s one thing to dress in casual western attire. But when someone like Prayut flaunts a Louis Vuitton, the word hypocrisy comes to mind. After all, here is a man who has been promoting his “Thai Niyom” campaign because he believes that stronger Thainess or Thaism can unite us despite the political divisions. “I just wore it but was not aware of the brand. I don’t know what’s the brand but it’s not so expensive,” he said. “The next time I will wear Pha Khao Ma [a traditional loincloth].” Regardless of what they wear, Thai generals should know that clothes don’t make the man. And if the countless coups in Thailand tell us anything it is that the Thai Army definitely lacks the sophistication and knowledge to run a country, much less make a fashion statement. Even more bewildering is the junta chief’s expectation that foreign press will write positive things about him. His spokesman Sansern Kaewkamnerd arranged an interview with Time, thinking it would be a quick public relations exercise for his Europe trip. But the publication held up a mirror to him and Prayut didn’t like what he saw. Now he is calling on Foreign Minister Don Pramudwinai to clean up the mess. One has to wonder if Don has the nerve to tell the junta chief that most people, foreigners included, don’t see him as that cuddly uncle he thinks he is. If anything, he is the ageing manager of a football team who has overstayed his welcome and needs to move on for somebody else to take over the team. Last but not least, what was just disappointing was the fact that Britain and France compromised on their democratic values and principles by allowing Prayut to visit. They should know that Thai people have placed great hopes on them to help us push for the return of democracy. This is not to say that people here haven’t been trying. It just that dealing with a military government can be hazardous to one’s health. Not only is the law on their side – naturally, because they make it up as they go along – but their guns are pointed at people’s heads, too. NT – EP 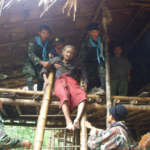