Home » Update with Video: London cop attacked with a machete 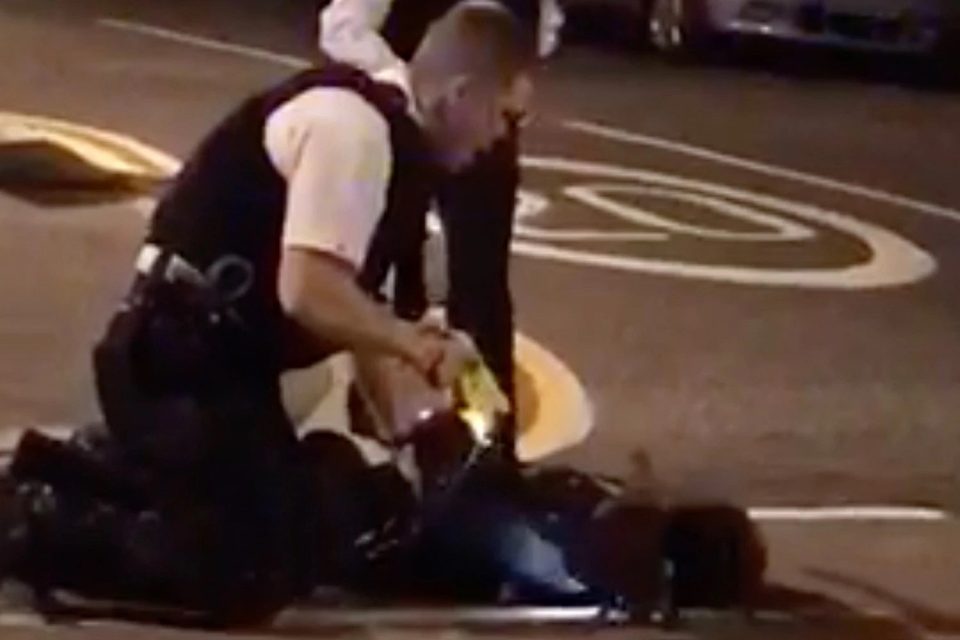 THIS is the terrifying moment a wounded cop Tasered a machete-wielding van driver before screaming “I’ve been stabbed”.

The hero officer, 28, managed to fight off his attacker despite being slashed in the head and body during the “frenzied” knife attack in Leyton, East London.

Exclusive footage obtained by The Sun Online shows the blood-soaked policeman shouting for horrified witnesses to hand him his radio as he collapses to the ground.

As the suspect can be seen lying next to him, the cop then radios for help.

He tells a colleague: “I need an ambulance now. I’ve been stabbed with a machete.”

A female cop swoops to pin down the suspect, appearing to pull a huge blade from him.

Witnesses can be heard screaming in fear as the cop crouches on all fours. He is believed to have tripped before being attacked.

Police said the suspect had been pulled over in his van on Coopers Lane shortly after midnight, suspected of driving without insurance.

During a two-minute conversation, the man had allegedly become “aggressive” and tried to get back into his van to drive away.

Det Ch Sup Richard Tucker told a press conference the suspect then pulled out a blade and attacked the officer.

Despite serious multiple head wounds and another to his hand, the unnamed PC was still able to hit back by zapping the man with his 50,000-volt Taser.

The cop, who has ten years’ service with the Met, was rushed to Royal London Hospital where he underwent surgery this morning.

He is now in a stable condition and expected to make a full recovery.

A 56-year-old man was arrested on suspicion of grievous bodily harm and remains in custody at an East London police station.

Prime Minister Boris Johnson said the attack “underscores for me the bravery of our police, people who actually go towards danger to keep us safer”.

Det Ch Sup Tucker, in charge of the North East Command Unit, said: “This was a frenzied and brutal attack on a uniformed officer carrying out his duties.

“What began as a routine vehicle stop transformed very quickly and unexpectedly into an unprovoked attack with a weapon.

“Thankfully, the officer was carrying a Taser and managed to use it.

“This stopped the suspect from inflicting any further injury and allowed the other officer to detain him. I honestly believe that using that Taser may have saved his life.” 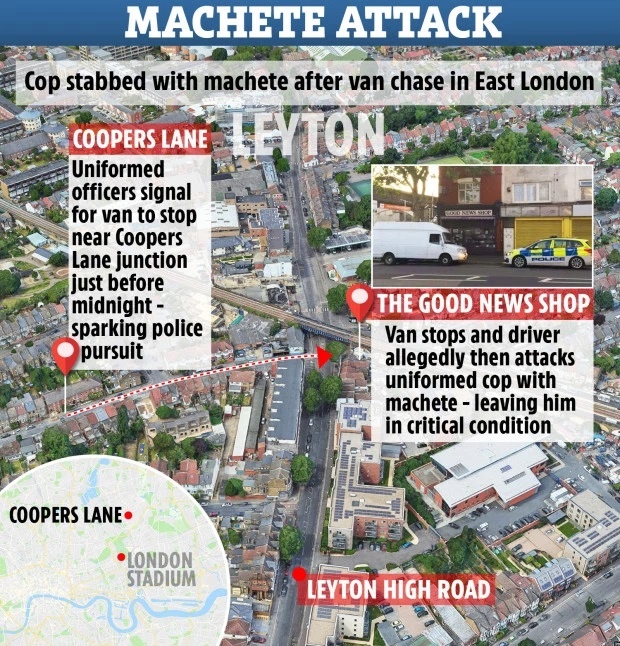 He praised the officer for his “bravery, resilience and determination”, adding: “Despite being repeatedly stabbed, his first thought was to protect his colleague and members of the public.”

Det Chief Supt Tucker visited him and said the courageous cop tried to shrug off concerns by saying: “I’m OK.”

The senior officer added: “That’s the type of character he is — he is an amazing police officer.”

But he added that the attack was a “symptom” of people having less respect for police and authority.

Forensics officers were at the scene throughout this morning and the van was removed by officers for further investigation.

Cops are also examining images from the body-cams worn by the officers involved.

Locals this morning spoke of their horror at the attack – as London’s knife crime epidemic continues to spiral out of control.

Uber driver Muhammad Faisal, 31, said he saw a suspect being held face-down on the floor before being bundled into the back of a police van.

He said: “All this time they were providing first aid, or trying to stop the bleeding and giving him CPR.

“I’ve never seen that amount of blood. I thought maybe he was dead.

“The first time we saw him moving his leg and speaking to his colleagues was after about five to seven minutes.

Patrick Kyle, 49, said he saw the suspect led away, adding: “The police officer was lying on the ground for about half an hour, before they took him away in an ambulance.

“The machete was massive. It was a killer machete. There was lots of blood. The officer’s white shirt was covered in blood.” 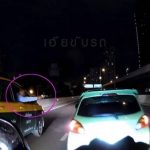 Gun pointing taxi driver turns out to be a POLICEMAN