World approaching the end of the Covid-19…

The Beatles memorabilia to be sold as… 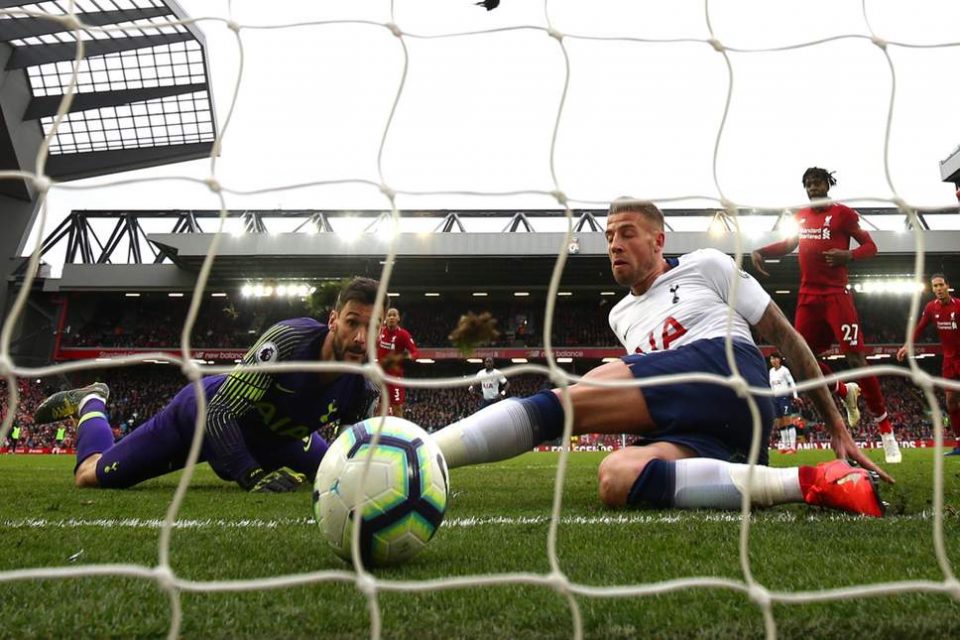 Liverpool Climb Back To The Top Of The Premier League Table As Calamitous  Hugo Lloris Hands Them A Last Gasp Winner – Highlights. Manager Comments. Player Ratings and Stats.

The record books will show that Toby Alderweireld scored a 90th minute own goal to gift wrap this game to Liverpool with no mention of Hugo Lloris. Unless further investigations into the game are carried out such as reading a full match report.

Trent Alexander-Arnold picked up the ball on the left after his corner had been partially cleared and he flung in a deep cross. At the back post, Mo Salah directed a weak header into the six-yard box. Lloris, unchallenged, could have kicked the ball away or just picked it up. He did neither. He dropped it in Alderweireld’s direction where it bounced off his leg and went in.

Lloris and Pickford are now in the special ‘Gifting Late Victories to Liverpool’ club which is quite something as they are the current number one keepers for their respective countries. They’ve presented Liverpool with four extra points which is why they are back on top of the table.

The ground announcer, probably missing not mentioning a goal from Salah for some time, quickly awarded the goal to Salah but it was an obvious own goal. Salah has now gone seven Premier League games without a goal and that could work in Liverpool’s favour! Look at the situation like this. Liverpool are top and Salah is NOT scoring. But he’s proved his class and that situation has to change soon!

Tottenham began three centre back juggernauts, Alderweireld, Jan Vertonghen, and Davinson Sanchez who should have dealt comfortably with crosses from either flank in open play. They didn’t. On 16 minutes Andrew Robertson, who seemed to have a free pass on Liverpool’s left, fired in a cross and Roberto Firmino firmly headed home. Somehow he’d ghosted in between the juggernauts.

Liverpool went close to scoring a second and Sadio Mané, with a delicious curling right-foot shot from outside the box, actually turned away ready to celebrate as he believed his shot would nestle in the corner of the net. It didn’t.

Tottenham changed to a flat back four for the second half with Vertonghen switching to left-back and Danny Rose joining the midfield mix. This worked a treat, Tottenham began to dominate, and it came as no surprise when they equalised. Harry Kane took a quick free-kick that put Christian Eriksen in space on Tottenham’s right. Eriksen crossed and Lucas Moura finished. At this point there only looked like one winner – Tottenham.

Jürgen Klopp: Former Liverpool player Dominic Mateo mentioned that this Liverpool team picked itself. I’m not sure. At the back, without the injured Joe Gomez, he’s probably right and the fab three up front pick themselves. It’s in midfield where Klopp was perhaps too cautious in playing James Milner and Jordan Henderson. They are both model professionals but Fabinho might have been a better option ahead of Henderson. Milner spent a lot of time covering Robertson as he bombed on from left back.

Mauricio Pochettino: Still suspended Pochettino spent the game in the stands passing on messages to his team at ground level by mobile phone. This gave him a clear view of what needed to be changed. He made the changes, which changed the game, but his captain let him down.

Alisson – 5. Extremely nervy at times, particularly with his feet. His mistake at Fulham was almost replicated in the first half, too, but the Brazilian breathed a huge sigh of relief.

Virgil van Dijk – 7. Not his finest performance, though the bar is extremely high. Won the battle with Kane, and made a team-high six clearances.

Joel Matip – 6. Spurs tried to hit long balls in his direction, such was his unease, and Moura caused him problems. But solid when the ball was not in orbit.

Andy Robertson – 8. Man of the match. Yes, Spurs gave him acres in the first half, but his delivery for the opener was sublime. Energetic, tenacious and always picks the right pass. The best left-back in the Premier League?

James Milner – 6. Tired towards the end and didn’t show too much on the ball, but stopped Spurs as much as Spurs stopped Liverpool.

Georginio Wijnaldum – 6. Big work rate, but not involved in play enough. Dropped deep in a 4-2-3-1 as the game wore on.

Jordan Henderson – 6. Sloppy on the ball and had the lowest pass rate of Liverpool’s midfielders (81 per cent from 47 passes). Not great but not bad.

Roberto Firmino – 7. Took his goal superbly, despite being unmarked, and chucked himself around the place well, competing in more duels than any other Liverpool player (12).

Sadio Mane – 7. Looked dangerous and threatened to stretch the Spurs defence, but end product just missing. Came close to scoring on a couple of occasions.

Mohamed Salah – 6. Caused a few groans among home fans before the winner with some miscued touches, and should have passed to Mane to make it 2-0 after half-time with Liverpool two versus one. Still needs a (proper) goal to get his belief back.

Subs
Fabinho (for Milner 77) 6 – assured for the final 15 minutes as Liverpool pushed for a winner.

Divock Origi (for Henderson 77) 6 – tireless down the wing to move Liverpool up the pitch and win the late corner before the winner.

Hugo Lloris – 3. It was a quiet afternoon for the Tottenham goalkeeper until his terrible error – described as “shocking” by Gary Neville – gifted victory to Liverpool. He should have held Salah’s header rather than push it out into Alderweireld, who did not have time to react.

Kieran Trippier – 5. At fault for Liverpool’s first goal as he didn’t get out quickly enough to close down Robertson, but helped make amends by making the run down the right for the equaliser.

Jan Vertonghen – 6. Benefitted from Tottenham’s change of formation at half-time and played an important role in keeping Alexander-Arnold quieter in the second half.

Toby Alderweireld – 6. A largely solid display from the defender, who made an excellent block to deny Salah in the second half when he carried through the middle. Unfortunate with the own goal as he couldn’t react quick enough to turn the ball away from goal.

Davinson Sanchez – 5. This was not Sanchez’s best game for Tottenham and he was replaced after 69 minutes.

Danny Rose – 7. A bright performance from the England defender, who was pushed up to play in a more attacking role after half-time and looked dangerous.

Moussa Sissoko – 6. Playing in a more defensive position, Sissoko was energetic and prevented Liverpool’s midfield from getting control. However, he missed a superb chance to put Spurs ahead when he blazed over the bar when through on goal. It could be a huge miss in Spurs’ season as well as the title race.

Lucas Moura – 7. The Brazilian looked like one of Spurs’ brightest players from the start and grabbed the equaliser when he fired into the net from close range.

Christian Eriksen – 6. Didn’t get into too many dangerous positions but looked lively on the ball and set up Lucas to score.

DeleAlli – 5. Playing in his second game for Tottenham since returning from injury, Alli struggled to have too much influence on proceedings.

Harry Kane – 7. Led the line well for Tottenham and showed quick thinking with the free-kick that led to the equaliser. Didn’t have many clear sights of goal himself.

Man of The Match: Andy Robertson