This was the terrifying moment a lorry erupted in a fireball after being struck by a massive bolt of lightning.

Julia Musina was driving along the motorway alongside the Black Sea in Russia during the terrifying storm.

She filmed the heavy rain lashing trucks in the opposite lane – seconds before lightning ripped down from the sky.

An enormous explosion lit up the sky as the container on the back of the articulated lorry erupted in a bright explosion followed by a second after shock.

Julia’s car was shaken by the force of the lightning bolt forcing her to pull over and recover before driving away on the route from Krasnodar to Sochi in the south west of the country on January 5.

She said: ”The storm was raging, like really bad. I started recording it and was not prepared for what happened next.

”Basically a massive bolt of lightning came from nowhere. It hit the truck and caused a large explosion.

Julia said there was no time to stop and see the outcome of the thunderous lightning strike.

She added: ”We were scared ourselves and could not check on the driver. We do not know what happened to him. There was no time for us to check, but he seemed to carry on driving.

”We were driving next to the Black Sea, so it was very rough and terrifying.” 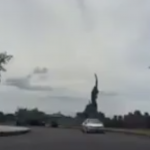 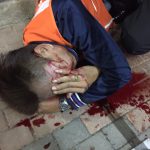