A leading Thai doctor has said rabies in Thailand is encouraged by people who feed stray soi dogs to make merit at the temple.

He has said that “kind people” are the source of the problem that sees more and more strays on the streets of Thailand. And that leaving a litter of pups at a temple is a sin, not a good deed.

This comes after claims of a “new deadlier rabies strain” killed a man in Pathum Thani within one day of being bitten by a dog he was giving food to.

And after figures were revealed from a Bangkok diseases centre that almost half of all dogs and cats tested have rabies.

The death of a motorcycle taxi rider has sparked a return of the rabies debate and been followed by dire warnings from Dr Thiravat Hemachudha at the disease unit of Chulalongkorn University who went onto his personal Facebook page to alert the public to the danger.

Death from rabies is hideous – when the patient is in the latter stages of the disease there is nothing that can be done to save them from a violent and ghastly death as the patient literally drowns in their own saliva as they slip into a coma.

But this can be avoided by immediately seeking jabs if the patient is bitten by a cat or dog.

But Dr Thiravat has slammed the whole culture of his fellow Thais who see it as being kind to give food to strays in their neighborhood.

He referred to the attack on a three year old called Nong Muk bitten twice on the face by a dog hanging about outside a 7-11 in Bang Khun Thian, Bangkok, recently.

The dogs hang out outside convenience stores to get a blast of air-con, he said, but the shop is unlikely to take responsibility and the dogs have no owners.

If the rabies virus is rampant – and figures suggest it is – then a trip to 7-11 or the like could be the beginning of the end if you get a bite and do nothing about it. Dogs may have no symptoms of having the virus and it may be ten days before they are visibly distressed.

By which time it may be too late for a person bitten.

Luckily the dog that bit Nong Muk was rabies free. But the motorcycle taxi driver was less lucky though other public health officials have played down public fears saying there is no new strain of rabies that can act by killing a person in one day.

But the figures for dogs and cats tested that were suspected of having the rabies virus after attacks on people or other animals are very alarming.

Since January 1st of this year until September 8th of 579 animals tested 276 were found to have rabies – very nearly half of all animals tested.

Dr Thiravat said: “If the rabies virus comes in epidemic proportions in could result in multiple tragedies” he commented saying that an innocent trip to 7-11 could be just the kind of occasion when the virus could be contracted.

He slammed the Thai public for their attitude in making the problem worse:

“If people care then they should not just feed these animals to make merit.

“They should lure them with food then round them up and have them spayed to stop reproducing and get them vaccinated.

This was the way to make merit, he implied. He said that there are many vets who will gladly spay and vaccinate “community” dogs and this will see their numbers diminish.

“If there are less dogs then they won’t have to fight for food, so they will not bite people or each other and thus the virus will not be spread”.

Then in a further attack on his irresponsible and merit seeking compatriots he said: “People who even own dogs that have puppies and take the unwanted ones unvaccinated and un-spayed to the temple are committing a sin not doing good”.

Official figures quoted by Thai Rath said that there are 7.4 million dogs on the streets of which less than a quarter have been vaccinated though it is thought that around 70 per cent of dogs that have owners have had jabs.

Referring to the death of the motorcycle taxi man the doctor said:

“This death came from an act of kindness – he just wanted to feed the dog and suffered the consequences of getting bitten.

“But rabies is here and the public should be very careful,” he warned adding that the issue was rather like a war of supposed ‘kind well meaning people vs rabies’.

Anyone bitten in Thailand by dogs or cats should immediately seek out a doctor and the animal concerned should be closely monitored. 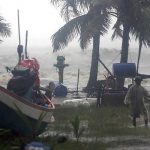 Summer storms set to cool Thailand down for a few days