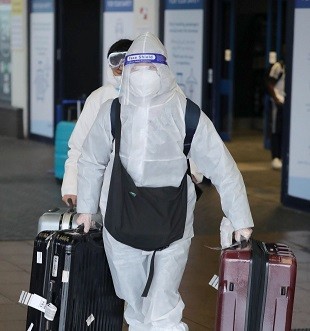 DESPERATE Brits scrambled to get some of the last flights home today after Boris Johnson announced all travel corridors would be axed after the weekend.

The strict new measures mean anyone coming into the UK from 4am on Monday will be ordered to isolate for 10 days.

Holiday makers who managed to dodge the lengthy isolation period were seen landing in airports up and down the country today.

Some took extra precautions in Manchester, donning hazmat suits and goggles to stop the Covid spread.

One woman was dressed head-to-toe in PPE as she struggled to push her heavy load through the airport.

Others heaved several suitcases at once as they trudged through arrivals in a desperate bid to make it back before Monday.

It comes after Boris Johnson said he was forced to “take additional steps” to stop mutant strains of Covid-19 entering Britain.

Speaking at last night’s press conference alongside Sir Patrick Vallance and Professor Chris Whitty, the PM said: “We are making such progress with the vaccine.

“What we don’t want is all that hard work undone by the arrival of a new variant that is vaccine-busting.

“It is vital to toughen restrictions now when day by day, hour by hour we are making such strides in protecting the population.”

Mr Johnson announced that “to protect us against the risk of as yet unidentified new strains, we will also temporarily close all travel corridors from 4am on Monday.”

The move will come in across all four corners of the UK, so all the rules will be the same, and there’s no time limit on how long it will last for.

This will be backed by more spot checks to ensure people are remaining in self-isolation, too – and anyone caught out faces a £1,000 fine.

At least two new strains – from Brazil and South Africa – have been identified which are even more easily spread – sparking panic among medics.

The most concerning variant, also detected in Japan, has not yet been found in the UK. But scientists have now confirmed a second mutation has been in Britain “some time” and been spotted 11 times.

It’s expected that more flights will now be cancelled across the world – causing more chaos for the struggling travel sector.

It is the toughest border lockdown the UK has ever imposed since last year’s March shutdown.

Many other countries have had testing at borders since last summer, but UK ministers have said it wasn’t needed.

Already Brits are banned from going on holiday thanks to the national lockdown – and should only be travelling for work or essential reasons anyway.

The PM said last night: “If you come to this country you must have proof of negative Covid tests that you have taken in the 72 hours before leaving, and you must have filled in passenger locator form. The airline will ask for proof of both.

“Upon arrival you must quarantine for 10 days not leaving for any reason, or take a test on day 5 and wait for proof of negative result.” 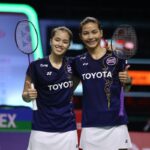 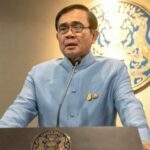