A Boeing jet came within half a runway’s length of smashing into another plane that still hadn’t cleared the airstrip as they both arrived at Hong Kong International Airport on Tuesday night, aviation chiefs have revealed.

The city’s new Air Accident Investigation Authority (AAIA) appeared likely to be called in to review the incident, which raised questions over whether controllers gave prompt orders to both planes and why the department only disclosed what happened a day later.

In a press release issued on Wednesday night, a spokesman for the Civil Aviation Department said: “At 7.47pm last night, a China Southern Airlines airliner travelling from Zhejiang to Hong Kong landed at the north runway as per the instruction of the [air traffic controller], while the preceding business jet that had landed on the same runway had not vacated the runway completely.”

He said the business jet, arrived from the Philippines, had acknowledged the instruction of the control officer to clear the runway quickly.

“The runway is 3,800 metres long. According to the preliminary information, the two aircraft were more than 1,800 metres apart when the [second] airliner touched down,” he said.

The department said no one was injured; the operation of the airport was unaffected; and it had reported the incident to the AAIA. The agency was recently set up to conform with global rules requiring investigations to be independent of local regulators.

According to arrivals data from the Airport Authority, the business jet had arrived from Angeles City. The second flight, using a Boeing 737-81B, was China Southern Airlines flight CZ6045 from Yiwu, Zhejiang province.

According to control tower audio heard by the Post, the controller spoke to the pilots in the final stages of landing. The unidentified controller instructed the business jet to “please expedite to clear [the] runway” as soon as possible.

The pilot acknowledged the instruction, according to the audio archives of LiveATC.com, a website which stores air traffic control recordings worldwide.

It is unclear from the recording whether the China Southern flight was instructed to land as the speech was inaudible, but the pilot contacted the control tower 46 seconds after it spoke to the earlier arrival, and the same controller told the pilot to “expect a late landing clearance”.

But the two aircraft soon ended up in close proximity on the airstrip.

A Cathay Pacific Airways pilot of 25 years’ experience said a late landing clearance instruction warned the pilots they may be asked to terminate the descent and go around for a second landing, due to another plane still being on the runway.

But he said the tower still had the discretion to clear the aircraft to land regardless.

The veteran said if the previous plane was still on the runway, the next aircraft in line should have been instructed to do a go-around. The pilot also has the discretion to decide on a go-around.

While no one was injured and there was still 1,800 metres between the planes, Civic Party legislator Jeremy Tam Man-ho, a commercial pilot, said it was still a dangerous situation.

“Weather conditions, such as a gust, can cause a plane to land a bit further from the target touchdown point,” he said. “Malfunctions in brakes could also mean a longer distance is required to decelerate.”

As such, Tam said, the rules state there should not be a plane on the runway when another is landing.

He said investigators would want to look into why the business jet took so long to leave the runway, and why the control officer did not instruct the pilot of the China Southern plane to go around. Tam added he would have expected the announcement of the incident to be made before noon on Wednesday, rather than in the evening. 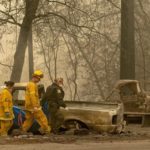