One of Bangkok’s largest booksellers has quietly pulled a book about the 2010 political unrest without explanation.

“Owners of the Map,” a new book by an Oxford fellow whose study of Bangkok’s motorcycle taxis was overtaken by the tumultuous events of 2010, was recently removed from the virtual shelves of Kinokuniya, a Japanese bookseller with several branches in Bangkok.

Author Claudio Sopranzetti, who lived in Thailand several years to conduct his research, said he noticed Wednesday that Kinokuniya’s listing for the book, which has yet to find domestic distribution in Thailand, had vanished from the bookseller’s website.

“Three days ago it was available on the Kinokuniya’s website for purchase and then it suddenly disappeared, you cannot find it anymore now,” Sopranzetti wrote in a message.

Kinokuniya has declined to discuss the book’s removal. There was no response to repeated inquiries made in numerous calls placed Thursday and Friday. One representative said the book was “out of stock” and another denied any knowledge of its removal. Both declined to give their names.

An employee working in one of Kinokuniya’s stores said the book had specifically been mentioned by title recently in regular communications about problematic works. The employee, who asked not to be named, said staff were told to tell customers that it was unavailable due to “inappropriate content.”

Someone in Kinokuniya’s management team on Friday also declined to explain the title’s removal and warned a reporter to “think carefully” before naming Kinokuniya as the bookstore, saying there could be consequences including retaliation against its employees. She also declined to give her name. Source: Khaosod 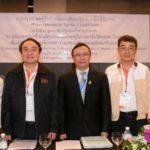 Phuket has reduced road accidents by half

Russian dies after forgetting keys and trying to climb into room