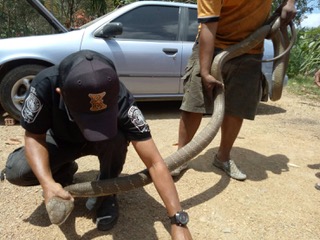 A 15ft-long King Cobra was found hiding under inside a car engine.

Thaichai Kongnimit, 55, parked the blue Nissan outside his home in Surat Thani province.

But when he went to drive to the market the next morning he heard a spine-chilling hissing sound coming from inside the engine.

Thaichai – concerned there was a mechanical problem – opened the bonnet and recoiled in horror when he saw the deadly serpent staring up at him, poised to strike with its menacing hood spread.

The father-of-three raced back inside his house to call the emergency services who sent the region’s best snake catcher to snare the beast.

Brave rescuer Tanawat Num took just two minutes to catch the enraged king cobra and put it inside a sack to be released back into the wild.

Relieved Thaichai said: ”The cobra could have killed me. I opened the bonnet to look down into the engine and I was about 30cm from its face.” 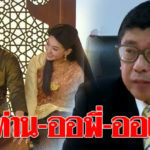 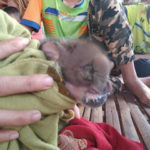 Mutant pig born with a trunk in Thailand