Peeing Dog: A Khon Kaen man has been arrested and slapped with an animal cruelty charge for shooting a neighbour’s dog dead out of anger after it urinated on his car’s wheel.

Police said Anon Phanpha was arrested on Tuesday for killing a four-year-old dog belonging to his neighbour, Rungthong Singhasetthakit, at Moo 10 village in Tambon Nong Ko in Kranuan district.

The dog was shot with a modified high-pressure air gun.

A pellet pierced the rear of its body, causing a 5mm hole. It died on the way to an animal hospital.

Rungthong told police that the dog escaped his house, and ran to pee on the wheel of Anon’s car before his neighbour shot it. 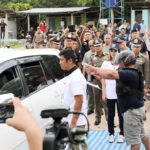