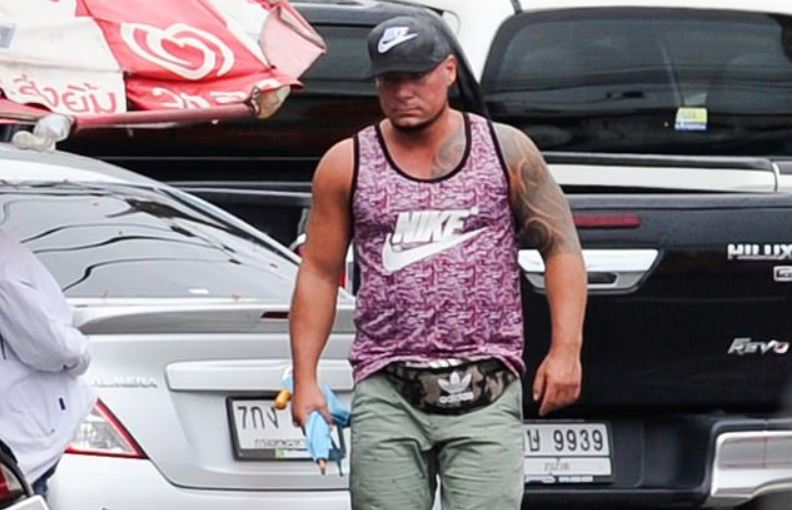 Roger Bullman, 54, was tracked down to a Phuket guesthouse where he is staying as he is on bail awaiting trial for killing IT consultant Amitpal Singh Bajaj.

Speaking to MailOnline while on bail awaiting trial, Bullman explained how a night of karaoke with his girlfriend in the Thai resort led to him singing on a hotel balcony at 4am before the fatal fight.

When Mr Bajaj, 34, who was staying in the next room with his wife of ten years and their son aged two, confronted him over the noise, Bullman throttled him.

‘Adrenalin took me over,’ said the bulky tattooed martial arts expert Bullman. ‘I didn’t want to kill him. I didn’t know he was dead until the police told me he had died in hospital.’

‘I have worked with psychiatric patients for 14 years and that is how you must restrain them ( chokehold).

Recalling the evening of August 21, Bullman said: ‘I was with my girlfriend and we were happy that night.’

Police said the Norwegian bodyguard, from Olso, Bullman had been drinking and began singing opera at 4am from his hotel balcony while his own girlfriend slept.

When London-born Mr Bajaj protested about the noise, Bullman opened a sliding door which separated their balconies and confronted the British IT engineer.

Mr Bajaj picked up the thin metal knife as he grappled with his attacker and tried to stab him, bending the blade in half.

Asked about the sequence of events, the killer said: ‘I didn’t mean to kill him, but, yes, it was me. I have been asked by my lawyer not to talk about what happened.’

He added: ‘I am sorry, really sorry. I am a father too and I can understand how his wife must be as they have a child.’

Bullman and his lover Elvira had flown to Phuket from Oslo via Bangkok on August 17 on a two-week package holiday. His wife told police she slept through the whole incident

‘I am not a monster. I have a nine-year-old daughter who I may not see again for a long time.’

He added: ‘I am going to jail for between three and ten years and at my age of 54 it is not going to be easy.

‘They make it tougher for you, the other guys, if you are older.

‘I am lost. My girlfriend has gone home and I am alone here.’

Mr Bajaj was strangled by Bullman after security were called twice to his hotel room to ask him to tone down his opera singing.

During the brawl the former soldier dragged Mr Bajaj out onto a walkway in front of their rooms.

Mr Bajaj was lying postrate with his killer’s arms still around his neck as officials intervened.

Security officials were twice called to ask him to refrain from waking guests next to his room 344 at the five star Centara Grand Hotel in the holiday resort of Phuket.

Mr Bajaj and his family were in the adjacent room 345 of the luxury resort hotel.

Mr Bajaj, as he grappled with his attacker, begged his wife Bandhna to escape with their two-year-old son Veer.

She heard her husband screaming for his life from the third floor when she reached the ground floor to seek help.

She told police Bullman kicked, punched and beat her husband after barging into their room and her husband had pleaded with her:’ Please leave and save our son.’

Mrs Bajaj later said: ‘My husband sacrificed his life to save my son’s life and mine. He will always be our hero.’.

When security officials returned a third time, they found Bullman in the last stages of choking Mr Bajaj to death.

He had tried to run, but was dragged from his room and onto a walkway where he struggled in vain to fight off his attacker who later admitted he had been drinking heavily in nearby bars.

One senior officer told MailOnline that as a former soldier and bodyguard Bullman ‘knew the technique to choke a man from behind.’

He added: ‘Bullman is a tough guy. The butter knife bent in half as he tried to fight back at him as he was being strangled from behind.

‘Bullman was too strong and Mr Bajaj tried to stop him by reaching for a knife and trying to stab him over his shoulder.’ Bullman was naked when he went berserk and barged into the Bajaj room.

Police said Bullman was crying and his victim barely breathing when they arrived.

Mr Bajaj, who had been celebrating his 10th wedding anniversary with his wife, died shortly after being taken to hospital.

Senior officer Taechin Deethongon told MailOnline Bullman said he had lost control and did not mean to kill Mr Bajaj.

On a web page set up in his memory, she wrote: ‘You will be remembered and missed for your courage, love and selflessness.’

A relative called Raja added: ‘Amit was a wonderful brother. Full of kindness, generosity and was a beautiful person.

‘ In my heart I know he has transcended to a greater spiritual place, so while he will be terribly missed, I know he was called upon for a greater purpose.’

Friend Faraz Virmani wrote: ‘My deepest condolences to Amit’s family. He was the best of men, intelligent, articulate, humble and peaceful. 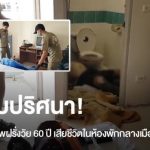