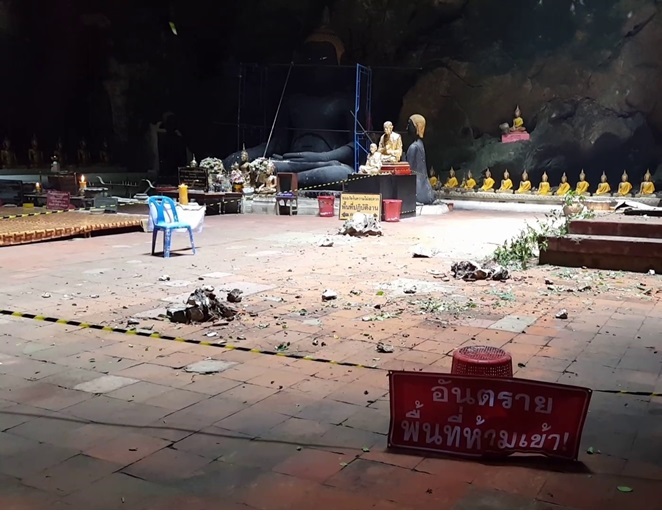 Provincial authorities on Wednesday (Aug 30) inspected Khao Luang cave in Phetchaburi province for safety reason after ceiling rocks fell and narrowly missed Chinese tourists.The team was headed by the governor Mrs Chatraporn Rajdusadee and joined by chiefs of the Phra Nakhon Khiri National Museum, and environmental office. About 5-6 ceiling rocks fell as a group of Chinese tourists was visiting the cave on Sunday (Aug 27). The rocks weigh about 50 kilograms each.

Although nobody was hurt but some artifacts in the cave were damaged as well as the ancient floor tiles near the main Buddha statue which dated to King Rama 4 and King Rama 5 era. Caretaker of the cave said the falling rocks forced the tourists to run in panic. But no one was hurt.

The cave is five kilometres away from the Khao Wang mountain. Inside the cave is a large hall surrounding by numerous Buddha statutes while the ceiling has various rock formations. After initial inspection the governor said there was heavy rain throughout the day causing the soil at the mouth cave to saturate. The roots of the trees on the mouth then sprang out, causing the rocks to fall, she said.

Mrs Chatraporn said she has advised authorities to inspect further if it is safe enough and put up a sign declaring part of the main hall of the cave off-limits. Currently the Fine Arts Department has hired a private contractor at 16 million baht to renovate the cave. However a group of historians was unhappy with the renovation works and alleged the contractor of removing the ancient floor tiles and replaced with new ones which has spoil its historical value.

But this was later clarified by the department that no ancient tiles were removed except those decayed ones which were removed and replaced properly under the historical site renovation principles. Thai PBS 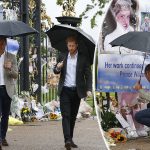 Princess Diana’s son pays tribute to their mother with flowers