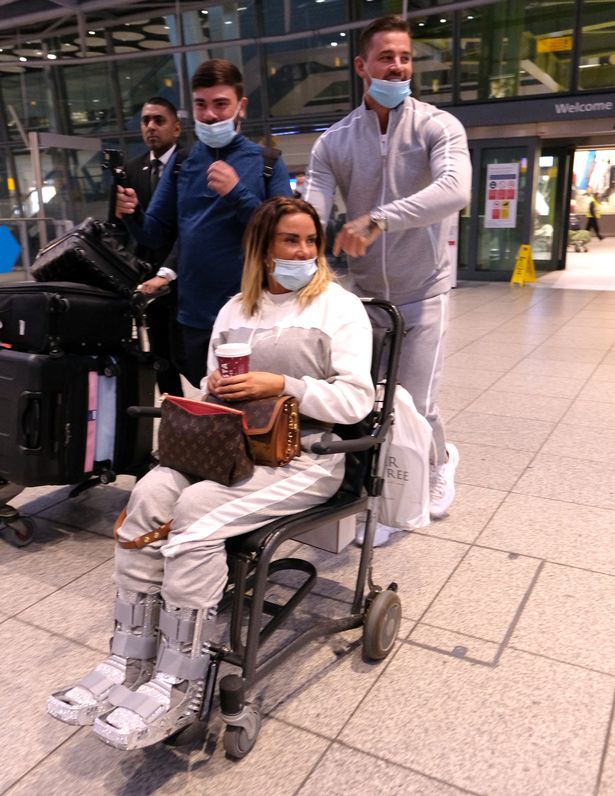 Katie Price was all smiles as she arrived at hospital in her wheelchair for a crucial scan on her broken feet which will tell her if she can walk again.

The former glamour model, 42, suffered the horror injuries after misjudging the height of a wall at a theme park in Turkey during the summer and has been unable to walk since.

Katie had to have the scan today to find out how her legs are healing following the accident and subsequent operation to repair the damage.

Despite it being a daunting day, Katie was in good spirits as she was being wheeled into Chelsea and Westminster Hospital in London by boyfriend Carl Woods, 31.

Katie, who donned a pink tracksuit and baseball cap, laughed behind her black face mask as Carl pushed her to the entrance.

Katie wore chunky grey medical moon boots as she arrived but later removed them to reveal her bare feet and surgery scars which looked to be healing well.about:blank?unblock=true

It comes after the pair returned from a holiday in the Maldives at the weekend where it is believed they tried for a baby.

Last week Katie was spotted taking a few steps with a helping hand from Carl during her romantic trip.

A source close to Katie gave an update on her injuries prior to the scan.

Speaking to The Sun, a source said: “One foot has been slower to heal than the other and she’s still in a lot of pain.

“But this scan will tell her when she can walk again, and how much pain she’ll be in.

“She’ll never be pain-free, she will find walking painful for the rest of her life, but she’s remaining positive and is really excited to find out when she’ll be able to walk on her own again.”

Last month Katie shared a series of graphic photos to her Instagram revealing just how bad her foot injuries were after rolls suggested she hadn’t hurt her feet.

The mum-of-five took to Instagram with some gory photos of her feet in hospital all stitched up and covered in dried blood.about:blank?unblock=true

Her feet had huge scars with stitches in after she went through surgery to try and speed up her recovery.

She also shared some photos of X-rays of her feet which revealed her ankle had been put back together with metal plates and screws.

Katie said in the caption: “For people who said I haven’t broken my feet or people saying I had a bunion operation (even though I’ve never had bunions) still won’t admit they wrongly accused me and speculated again saying I’ve made it all up, will now see I wasn’t lying to the point I’ve had major surgery to my life changing injuries.” 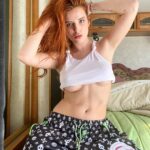 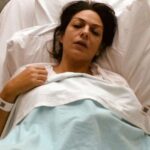