AT THE AGE of 107, a Karen-ethnic man yesterday received his first national identity card from Thailand.

Ko-ei Meemi presented himself on Tuesday to the Phetchaburi’s Kaeng Krachan district office to have his photo taken for an ID card that has been delayed for about 10 years.

“He called on the National Human Rights Commission for help,” said rights commissioner Tuenjai Deetes. “So, we assigned the Human Rights Lawyers Association to submit Ko-ei’s request for Thai nationality.”

In response to the request, the registrar at the Kaeng Krachan District Office examined the documents and witnesses before finally granting approval.

Ko-ei is a prominent figure, particularly among Karen-ethnic people living in Phetchaburi, who regard him as a spiritual leader.

One of his grandsons, Pholachi “Billy” Rakchongcharoen, was a respected activist. Pholachi, however, disappeared in 2014 after last being seen in the custody of forestry officials. His suspected enforced disappearance made international headlines.

Tuenjai said it was a good sign that Ko-I has finally received his national ID card.

Without Thai citizenship, Ko-I had long been unable to access state-provided welfare, such as the state subsidy for the elderly. The government pays at least Bt600 a month to Thais aged over 60 years. The older a person, the higher the subsidy, with centenarians entitled to Bt1,000 a month.

Tuenjai said many elderly people in Thailand had difficulty winning recognition of their right to Thai citizenship even though they had long lived in the country.

“Without Thai citizenship, they have a difficult life. Apart from the lack of access to state welfare, their travels are also limited,” she said. “We hope Ko-ei’s case will mean many more seniors will get the same opportunity.”

“He often brought meat and chillies to my grandpa,” Dulyasit said. “He also offered advice on how to take care of a white elephant.” 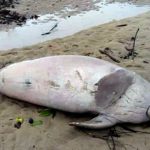